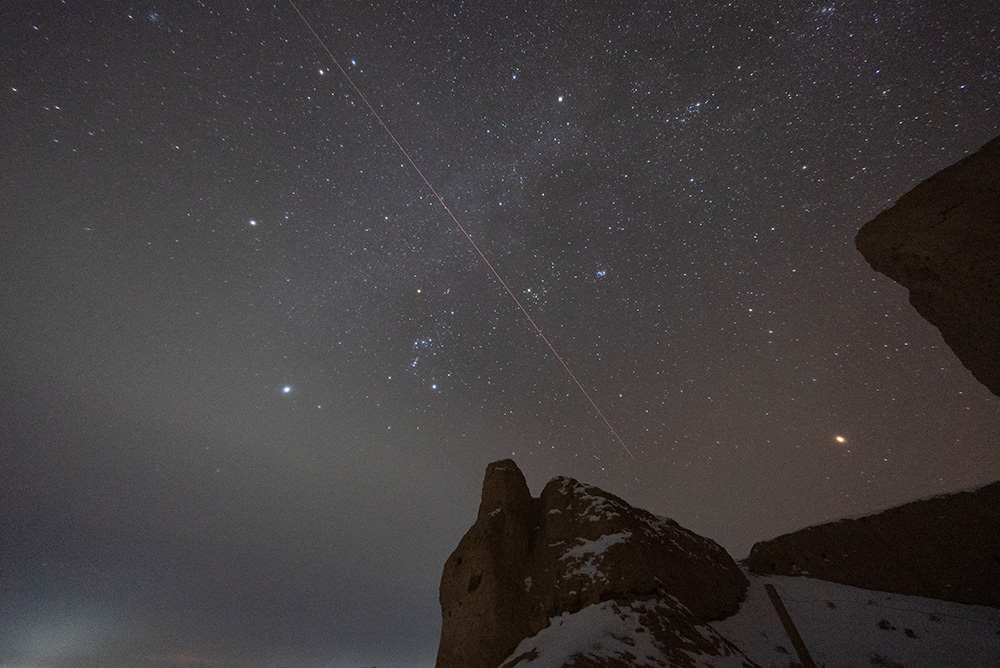 Familiar stars of a northern winter’s night shine in this night skyview, taken near Zhangye, Gansu, China and the border with Inner Mongolia. During the early hours of December 17 Orion is near center in the single exposure that captures a fireball streaking across the sky, almost as bright as yellowish Mars shining on the right. Splitting Gemini’s twin bright stars Castor and Pollux near the top of the frame, the fireball’s trail and timing are consistent with the second skipping atmospheric entry of the Chang’e 5 mission’s returner capsule. The returner capsule was successfully recovered after landing in Inner Mongolia, planet Earth with about 2 kilograms of lunar material on board. The lunar sample is thought to contain relatively young material collected near the Mons Rumker region of the Moon’s Oceanus Procellarum. Launched on November 23 UT, China’s Chang’e 5 mission is the first lunar sample return mission since the Soviet Unionâ€™s Luna 24 mission in 1976. [via NASA] https://ift.tt/3rCDwr3
Anuncio publicitario 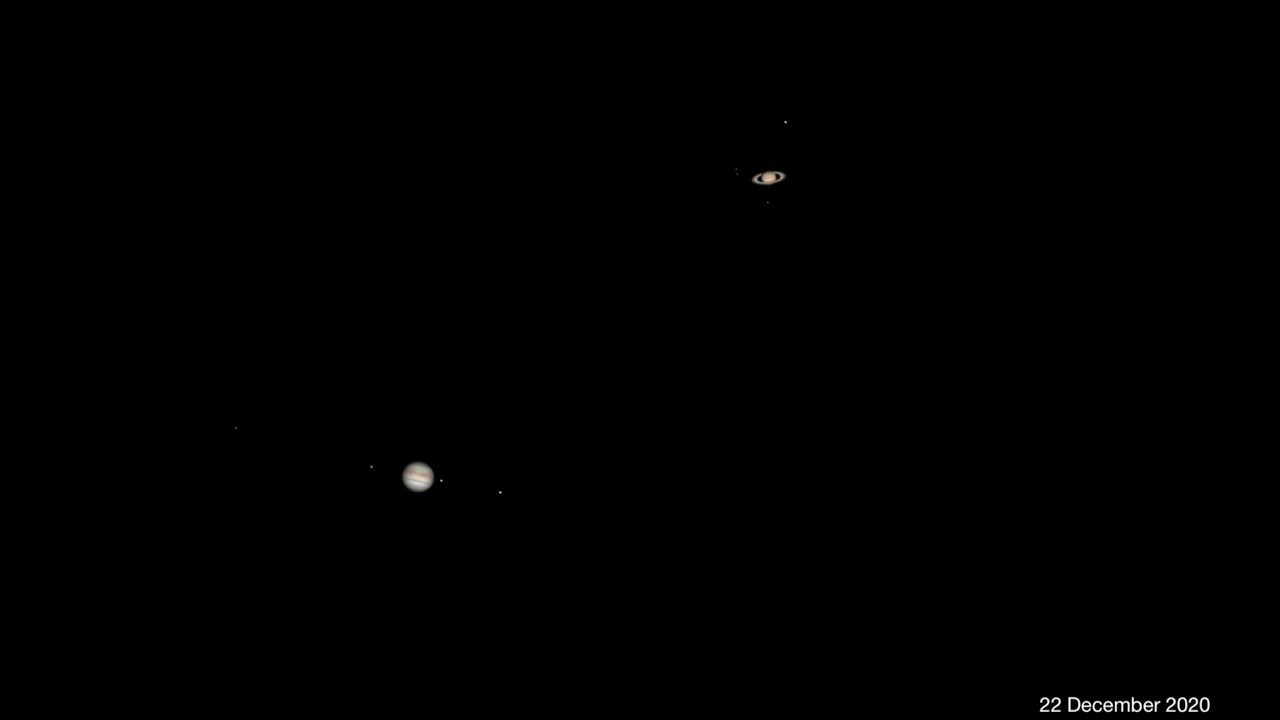 Yes, but have you seen a movie of Jupiter and Saturn’s Great Conjunction? The featured time-lapse video was composed from a series of images taken from Thailand and shows the two giant planets as they angularly passed about a tenth of a degree from each other. The first Great Conjunction sequence shows a relative close up over five days with moons and cloud bands easily visible, followed by a second video sequence, zoomed out, over 9 days. Even though Jupiter and Saturn appeared to pass unusually close together on the sky on December 21, 2020, in actuality they were still nearly a billion kilometers apart. The two gas giants are destined for similar meet ups every 19.86 years. However, they had not come this close, angularly, for the past 397 years, and will not again for another 60 years. If you’re willing to wait until the year 7541, though, you can see Jupiter pass directly in front of Saturn. [via NASA] https://ift.tt/37W2Pwk 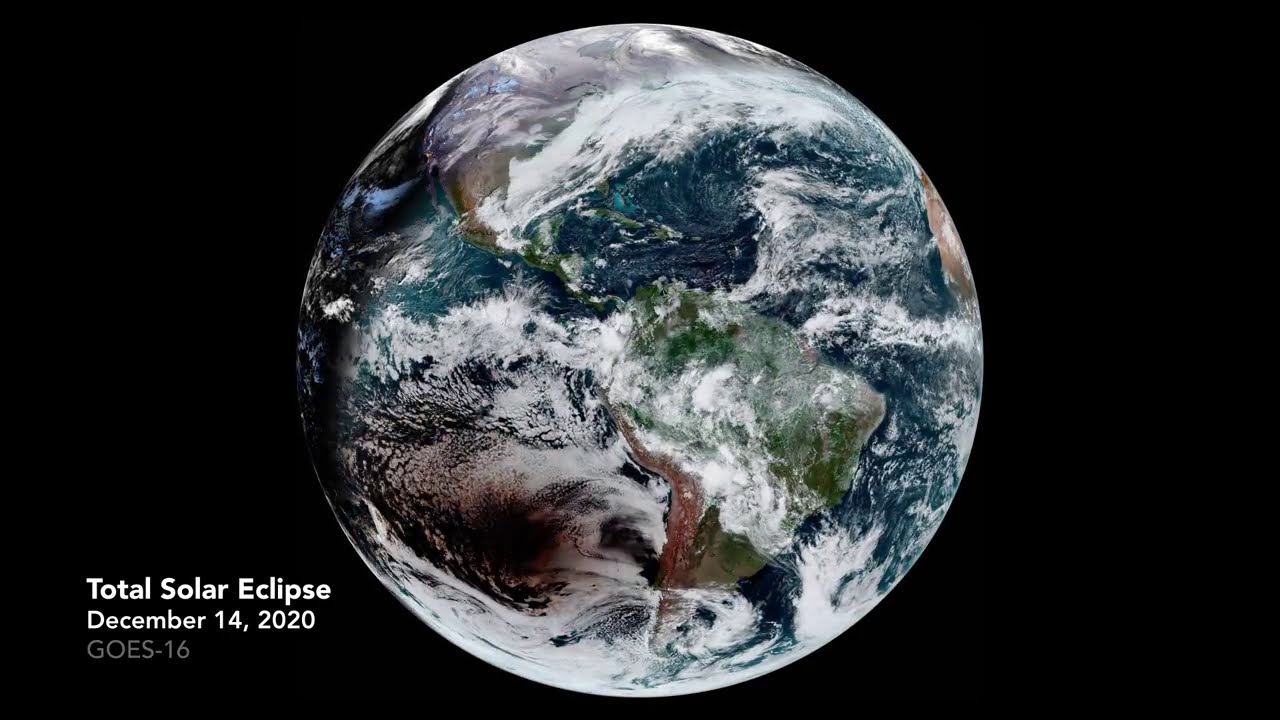 What does the Earth look like during a total solar eclipse? It appears dark in the region where people see the eclipse, because that’s where the shadow of the Moon falls. The shadow spot rapidly shoots across the Earth at nearly 2,000 kilometers per hour, darkening locations in its path — typically for only a few minutes — before moving on. The featuredÂ video shows the Earth during the total solar eclipse earlier this month. The time-lapse sequence, taken from a geostationary satellite, starts with the Earth below showing night but the sun soon rises at the lower right. Clouds shift as day breaks over the blue planet. Suddenly the circular shadow of the Moon appears on the left and moves rapidly across South America, disappearing on the lower right. The video ends as nightfall begins again. The next total solar eclipse will occur next December — but be visible only from parts of Antarctica. [via NASA] https://ift.tt/3mY0pkS 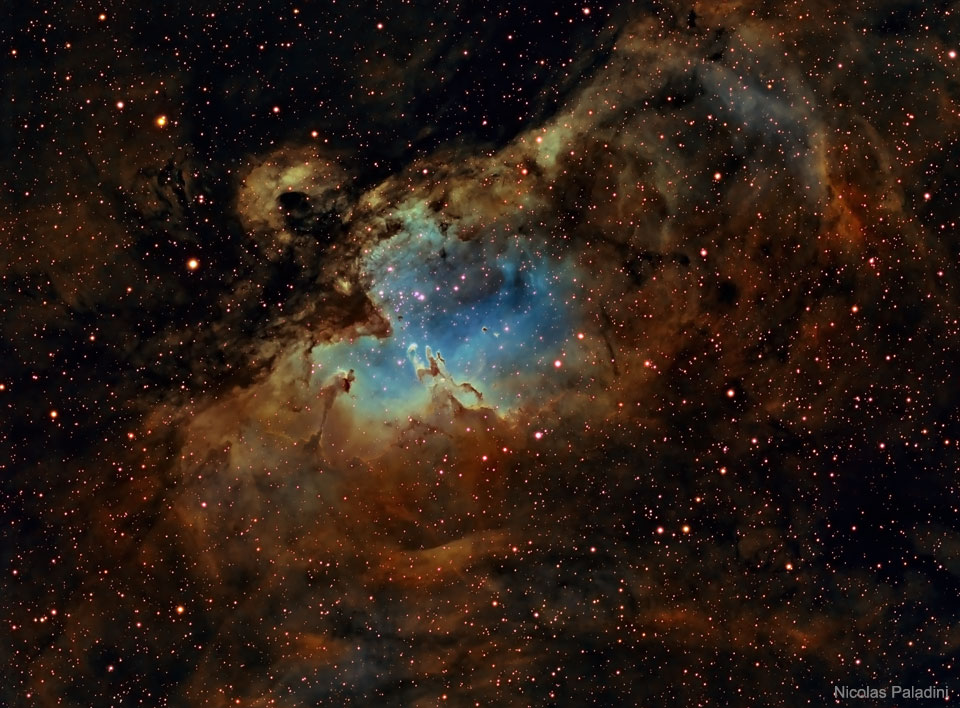 From afar, the whole thing looks like an Eagle. A closer look at the Eagle Nebula, however, shows the bright region is actually a window into the center of a larger dark shell of dust. Through this window, a brightly-lit workshop appears where a whole open cluster of stars is being formed. In this cavity tall pillars and round globules of dark dust and cold molecular gas remain where stars are still forming. Already visible are several young bright blue stars whose light and winds are burning away and pushing back the remaining filaments and walls of gas and dust. The Eagle emission nebula, tagged M16, lies about 6500 light years away, spans about 20 light-years, and is visible with binoculars toward the constellation of the Serpent (Serpens). This picture involved over 12 hours of imaging and combines three specific emitted colors emitted by sulfur (colored as red), hydrogen (yellow), and oxygen (blue). [via NASA] https://ift.tt/37PeaOG 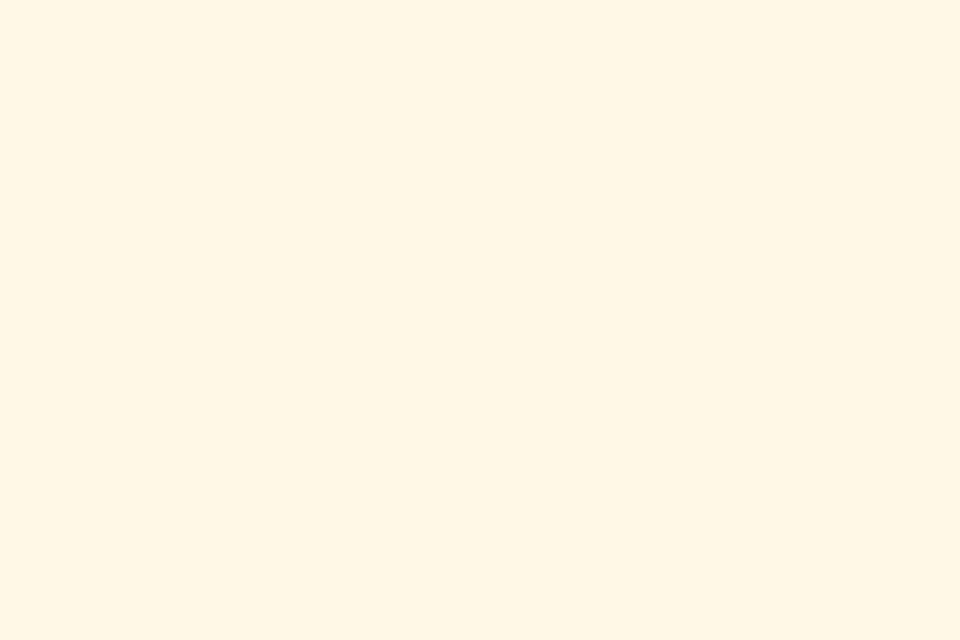 What color is the universe? More precisely, if the entire sky were smeared out, what color would the final mix be? This whimsical question came up when trying to determine what stars are commonplace in nearby galaxies. The answer, depicted above, is a conditionally perceived shade of beige. In computer parlance: #FFF8E7. To determine this, astronomers computationally averaged the light emitted by one of the larger samples of galaxies analyzed: the 200,000 galaxies of the 2dF survey. The resulting cosmic spectrum has some emission in all parts of the electromagnetic spectrum, but a single perceived composite color. This color has become much less blue over the past 10 billion years, indicating that redder stars are becoming more prevalent. In a contest to better name the color, notable entries included skyvory, univeige, and the winner: cosmic latte. [via NASA] https://ift.tt/3plkCCM 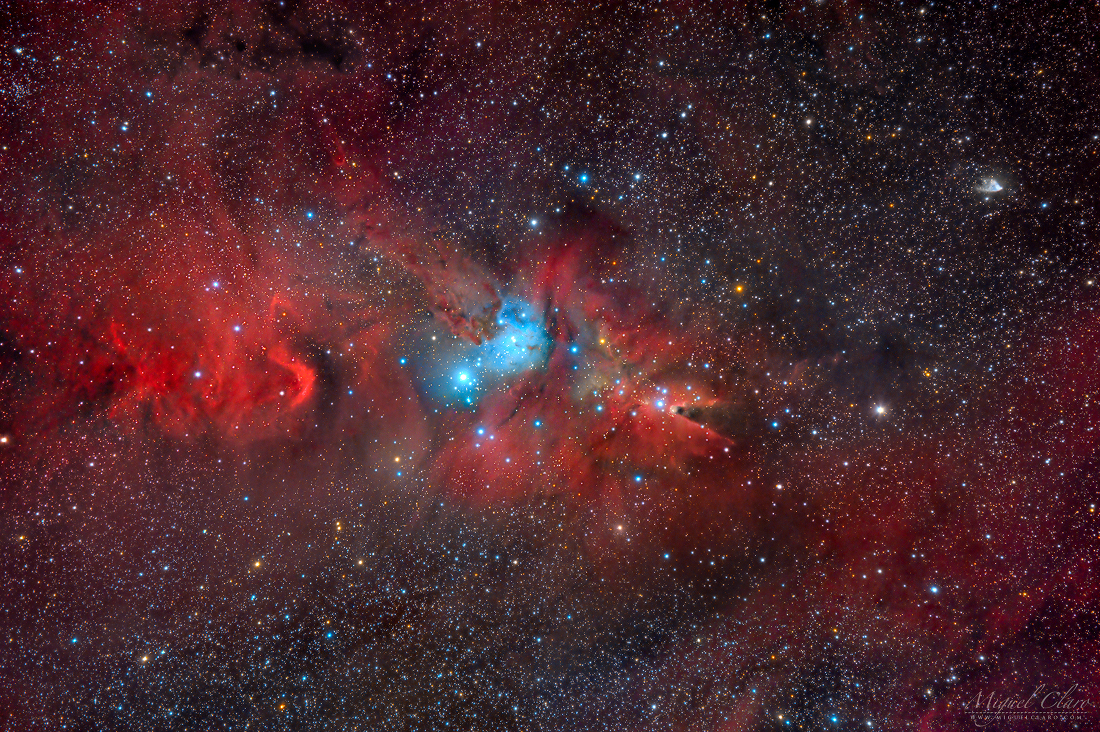 Clouds of glowing hydrogen gas fill this colorful skyscape in the faint but fanciful constellation Monoceros, the Unicorn. A star forming region cataloged as NGC 2264, the complex jumble of cosmic gas and dust is about 2,700 light-years distant and mixes reddish emission nebulae excited by energetic light from newborn stars with dark interstellar dust clouds. Where the otherwise obscuring dust clouds lie close to the hot, young stars they also reflect starlight, forming blue reflection nebulae. The telescopic image spans about 1.5 degrees or 3 full moons, covering nearly 80 light-years at the distance of NGC 2264. Its cast of cosmic characters includes the the Fox Fur Nebula, whose dusty, convoluted pelt lies left of center, bright variable star S Monocerotis immersed in the blue-tinted haze near center, and the Cone Nebula pointing in from the right side of the frame. Of course, the stars of NGC 2264 are also known as the Christmas Tree star cluster. The triangular tree shape is seen on its side here. Traced by brighter stars it has its apex at the Cone Nebula. The tree’s broader base is centered near S Monocerotis. [via NASA] https://ift.tt/3aIKwws 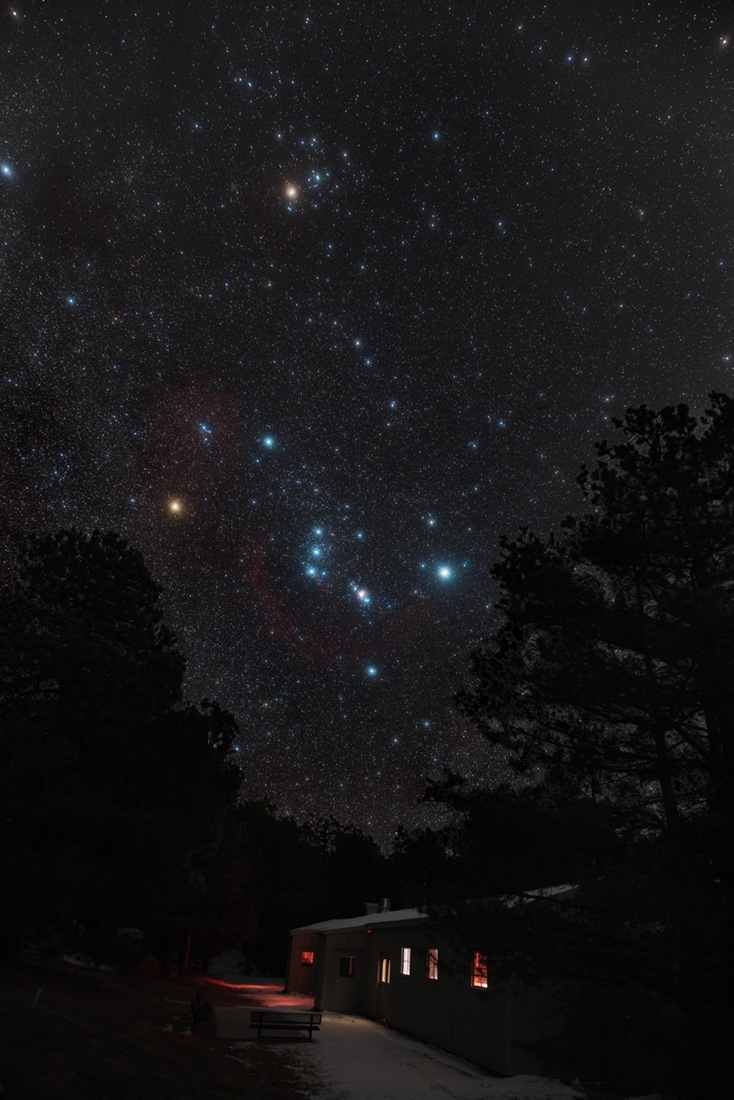 Orion always seems to come up sideways on northern winter evenings. Those familiar stars of the constellation of the Hunter are caught above the trees in this colorful night skyscape. Not a star at all but still visible to eye, the Great Nebula of Orion shines below the Hunter’s belt stars. The camera’s exposure reveals the stellar nursery’s faint pinkish glow. Betelgeuse, giant star at Orion’s shoulder, has the color of warm and cozy terrestrial lighting, but so does another familiar stellar giant, Aldebaran. Alpha star of the constellation Taurus the Bull, Aldebaran anchors the recognizable V-shape traced by the Hyades Cluster toward the top of the starry frame. [via NASA] https://ift.tt/34ZK6hF 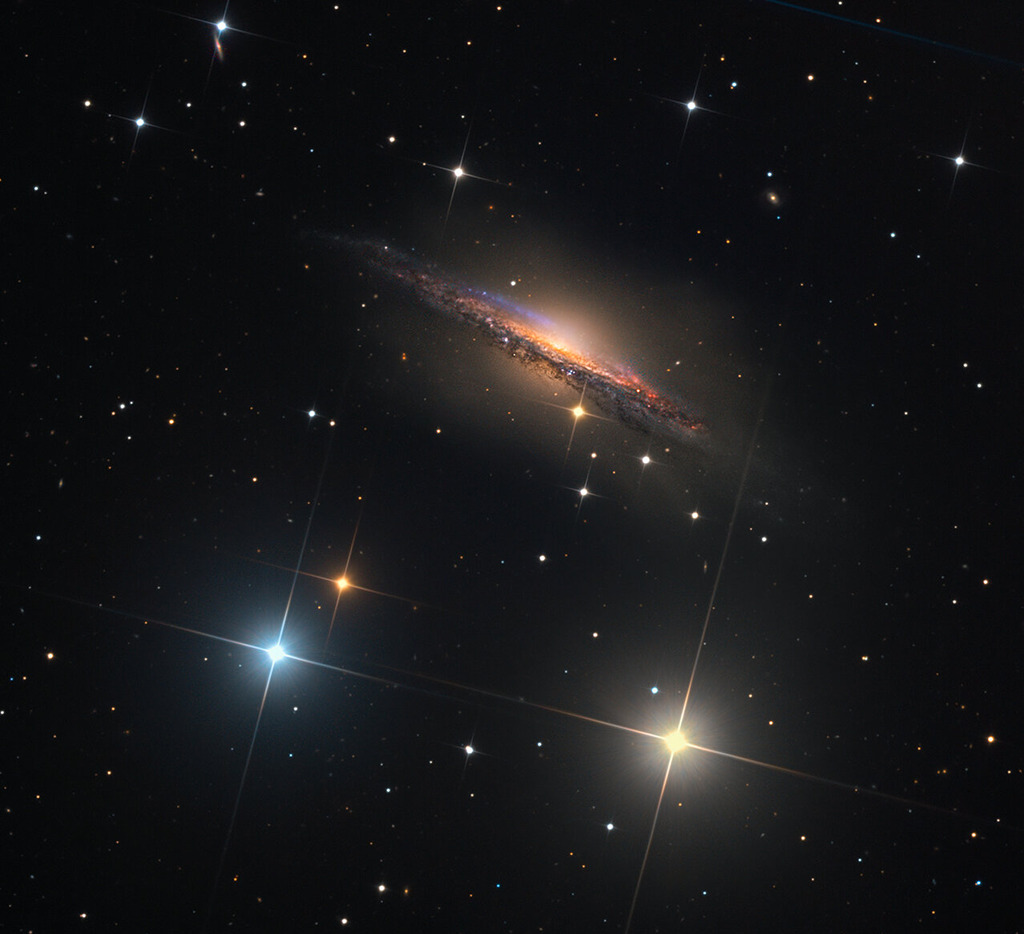 Big, beautiful spiral galaxy NGC 1055 is a dominant member of a small galaxy group a mere 60 million light-years away toward the aquatically intimidating constellation Cetus. Seen edge-on, the island universe spans over 100,000 light-years, a little larger than our own Milky Way galaxy. The colorful, spiky stars decorating this cosmic portrait of NGC 1055 are in the foreground, well within the Milky Way. But the telltale pinkish star forming regions are scattered through winding dust lanes along the distant galaxy’s thin disk. With a smattering of even more distant background galaxies, the deep image also reveals a boxy halo that extends far above and below the central bluge and disk of NGC 1055. The halo itself is laced with faint, narrow structures, and could represent the mixed and spread out debris from a satellite galaxy disrupted by the larger spiral some 10 billion years ago. [via NASA] https://ift.tt/2Jl2p9k 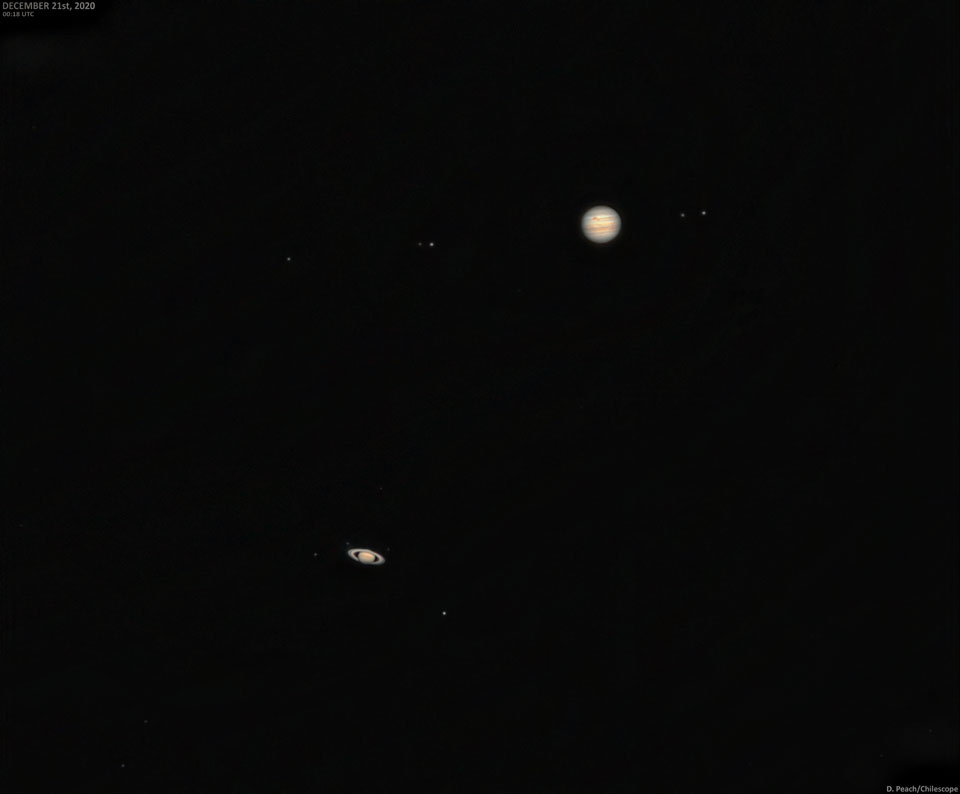 It was time for their close-up. Last week Jupiter and Saturn passed a tenth of a degree from each other in what is known a Great Conjunction. Although the two planets pass each other on the sky every 20 years, this was the closest pass in nearly four centuries. Taken early in day of the Great Conjunction, the featured multiple-exposure combination captures not only both giant planets in a single frame, but also Jupiter’s four largest moons (left to right) Callisto, Ganymede, Io, and Europa — and Saturn’s largest moon Titan. If you look very closely, the clear Chilescope image even captures Jupiter’s Great Red Spot. The now-separating planets can still be seen remarkably close — within about a degree — as they set just after the Sun, toward the west, each night for the remainder of the year. [via NASA] https://ift.tt/2KPYFwZ 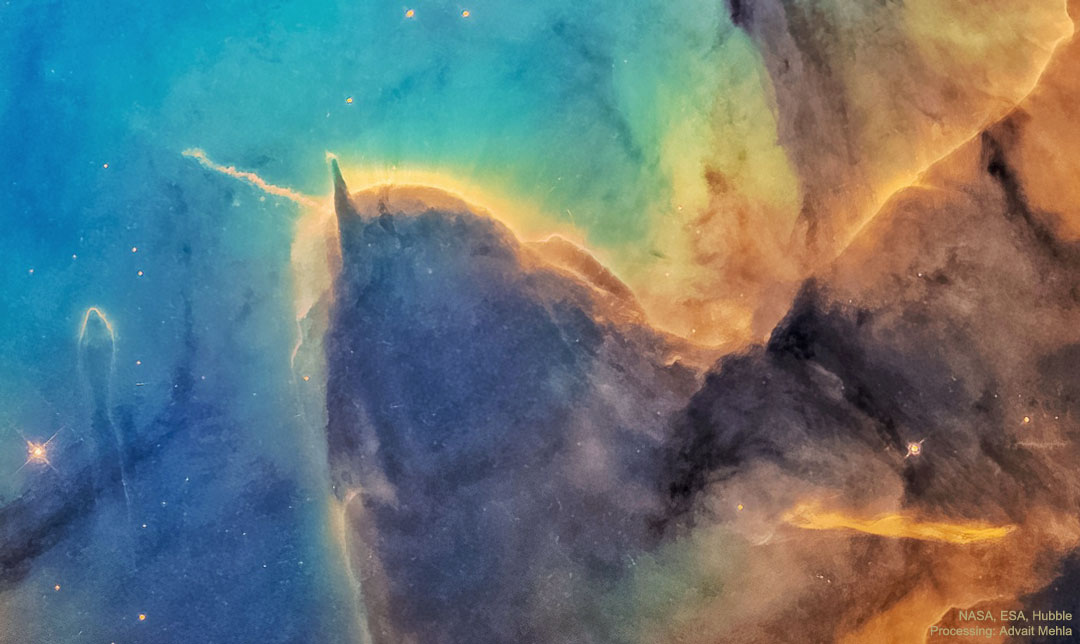 Dust pillars are like interstellar mountains. They survive because they are more dense than their surroundings, but they are being slowly eroded away by a hostile environment. Visible in the featured picture is the end of a huge gas and dust pillar in the Trifid Nebula (M20), punctuated by a smaller pillar pointing up and an unusual jet pointing to the left. Many of the dots are newly formed low-mass stars. A star near the small pillar’s end is slowly being stripped of its accreting gas by radiation from a tremendously brighter star situated off the top of the image. The jet extends nearly a light-year and would not be visible without external illumination. As gas and dust evaporate from the pillars, the hidden stellar source of this jet will likely be uncovered, possibly over the next 20,000 years. [via NASA] https://ift.tt/34zUR9W
Rafael Bustamante
Cargando comentarios...