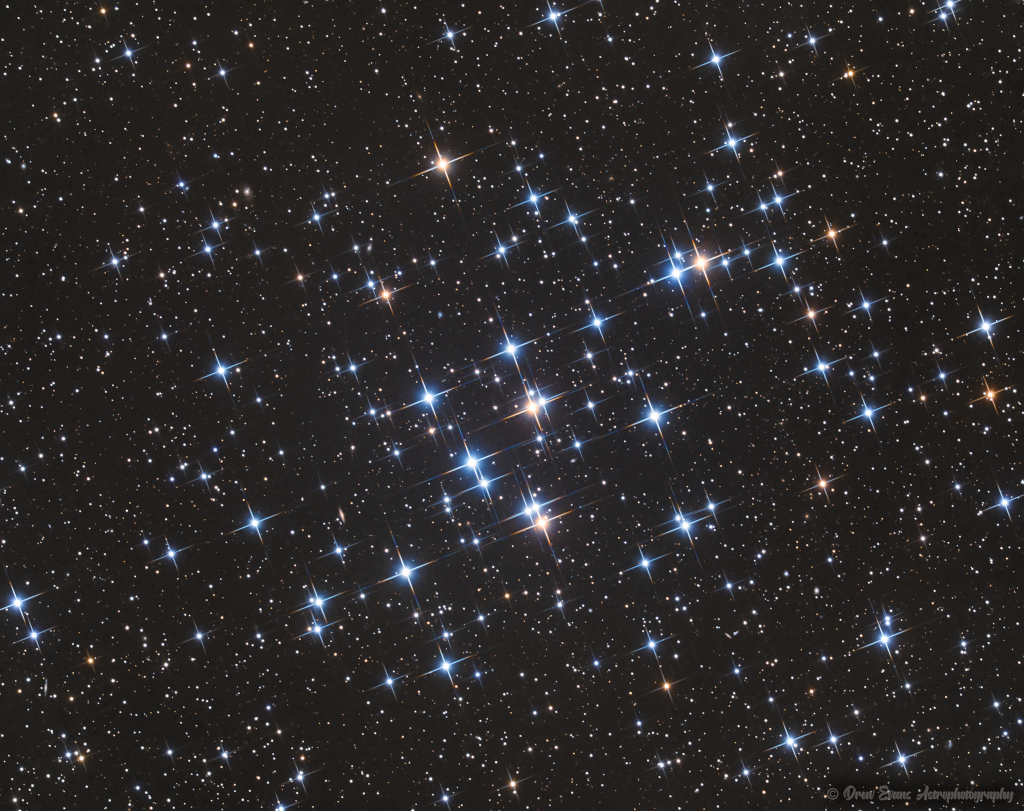 A mere 600 light-years away, M44 is one of the closest star clusters to our solar system. Also known as the Praesepe or the Beehive cluster its stars are young though, about 600 million years old compared to our Sun’s 4.5 billion years. Based on similar ages and motion through space, M44 and the even closer Hyades star cluster in Taurus are thought to have been born together in the same large molecular cloud. An open cluster spanning some 15 light-years, M44 holds 1,000 stars or so and covers about 3 full moons (1.5 degrees) on the sky in the constellation Cancer. Visible to the unaided eye, M44 has been recognized since antiquity. Described as a faint cloud or celestial mist long before being included as the 44th entry in Charles Messier’s 18th century catalog, the cluster was not resolved into its individual stars until telescopes were available. A popular target for modern, binocular-equipped sky gazers, the cluster’s few yellowish tinted, cool, red giants are scattered through the field of its brighter hot blue main sequence stars in this telescopic group snapshot. Dramatic diffraction spikes highlighting the brighter cluster members were created with string crossed in front of the telescope’s objective lens. [via NASA] https://ift.tt/mLrks7l
Anuncio publicitario 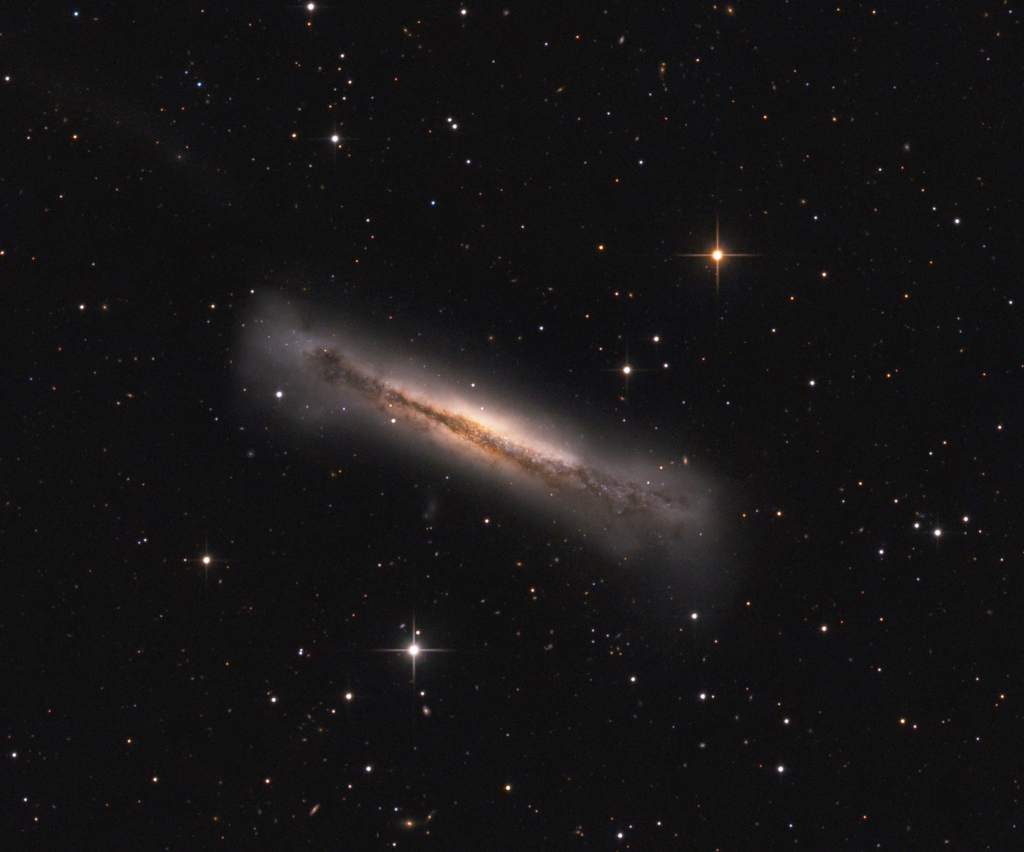 Sharp telescopic views of NGC 3628 show a puffy galactic disk divided by dark dust lanes. Of course, this portrait of the magnificent, edge-on spiral galaxy puts some astronomers in mind of its popular moniker, the Hamburger Galaxy. It also reveals a small galaxy nearby (below), likely a satellite of NGC 3628, and a very faint but extensive tidal tail. The drawn out tail stretches for about 300,000 light-years, even beyond the upper left edge of the frame. NGC 3628 shares its neighborhood in the local universe with two other large spirals M65 and M66 in a grouping otherwise known as the Leo Triplet. Gravitational interactions with its cosmic neighbors are likely responsible for creating the tidal tail, as well as the extended flare and warp of this spiral’s disk. The tantalizing island universe itself is about 100,000 light-years across and 35 million light-years away in the northern springtime constellation Leo. [via NASA] https://ift.tt/DaRos0U 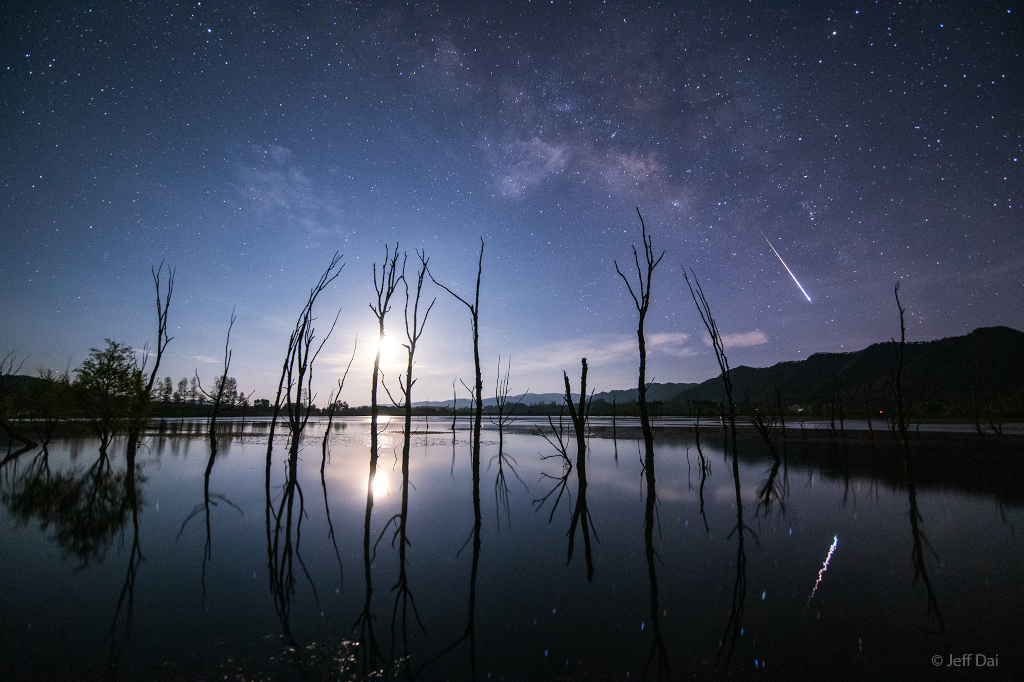 In the early hours of April 24 this bright Lyrid meteor flashed along the central Milky Way. For a moment, it cast a bright reflection across Lake Nian, Yunnan province, China. The annual Lyrid meteor shower, one of the oldest known, is active in late April, as our fair planet plows through dust left along the orbit of long-period comet Thatcher. The trail of the bright fireball points back toward the shower’s radiant in the constellation Lyra high in the northern springtime sky and off the top of the frame. Just rising in that starry sky, light from a third quarter moon also cast a glow on the peaceful waters of the lake. [via NASA] https://ift.tt/i25BPoU 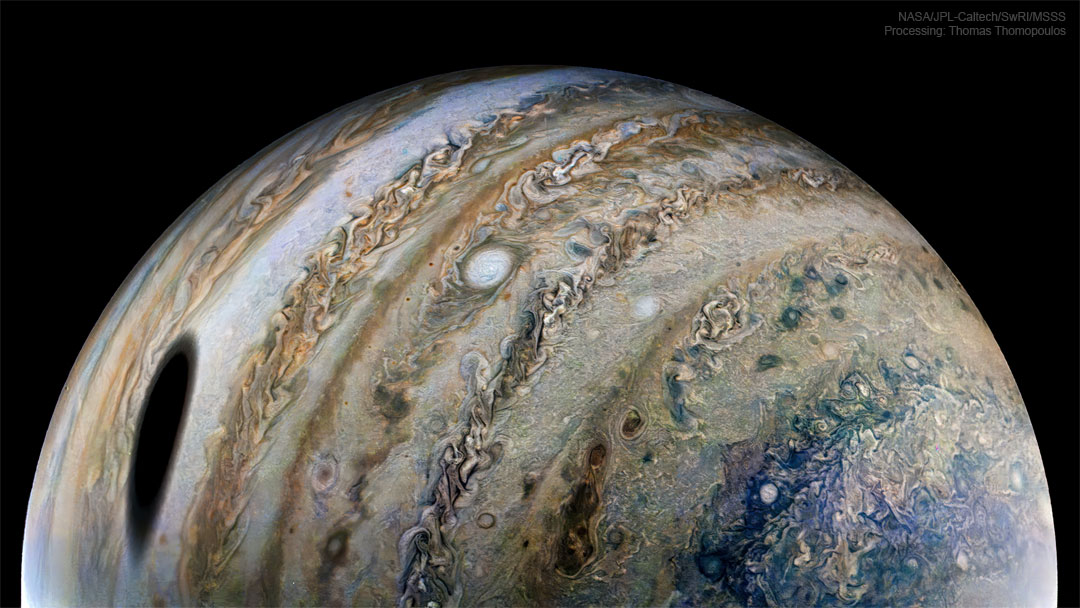 What is that large dark spot on Jupiter? It’s the shadow of Io, one of Jupiter’s largest moons. When Jupiter’s moons cross between the Jovian giant and the Sun, they created shadows just like when the Earth’s moon crosses between the Earth and the Sun. Also like on Earth, if you were in a dark shadow on Jupiter, you would see a moon completely eclipse the Sun. Unlike on Earth, moon shadows occur most days on Jupiter — what’s more unusual is that a spacecraft was close enough to record one with a high-resolution image. That spacecraft, Juno, was passing so close to Jupiter in late February that nearby clouds and the dark eclipse shadow appear relatively large. Juno has made many discoveries about our Solar System’s largest planet, including, recently, rapidly expanding circular auroras. [via NASA] https://ift.tt/ef4lYVc 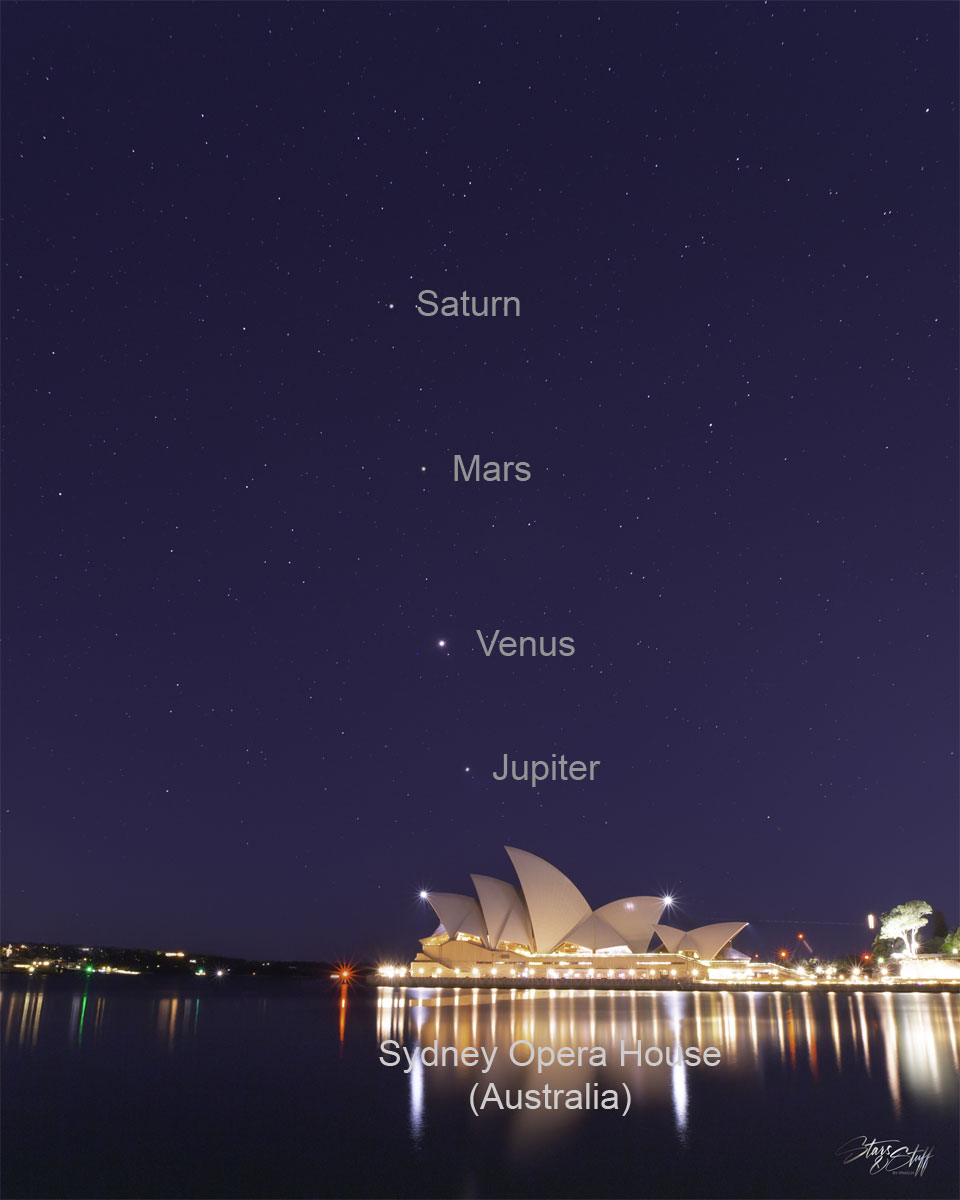 The world is waking up to a picturesque planet parade. Just before dawn, the eastern skies over much of planet Earth are decorated by a notable line of familiar planets. In much of Earth’s northern hemisphere, this line of planets appears most nearly horizontal, but in much of Earth’s southern hemisphere, the line appears more nearly vertical. Pictured over the Sydney Opera House in southern Australia, the planet line was captured nearly vertical about five days ago. From top to bottom, the morning planets are Saturn, Mars, Venus, and Jupiter. As April ends, the angular distance between Venus and Jupiter will gradually pass below a degree as they switch places. Then, as May ends, Jupiter will pass near Mars as those two planets switch places. In June, the parade will briefly expand to include Mercury. [via NASA] https://ift.tt/KbjWaV8 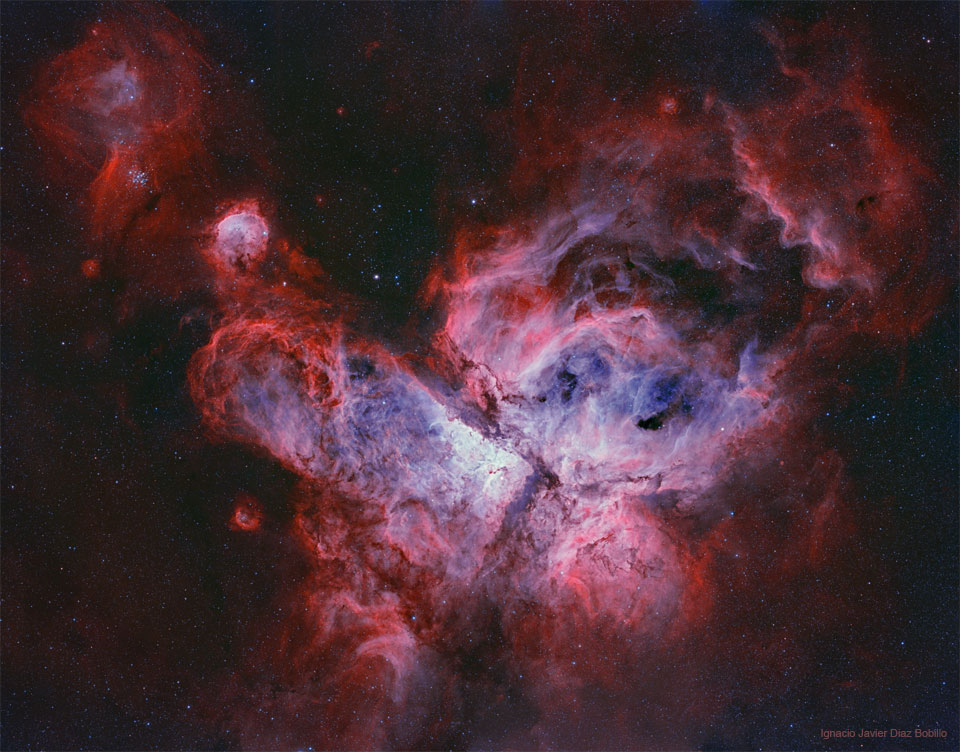 In one of the brightest parts of Milky Way lies a nebula where some of the oddest things occur. NGC 3372, known as the Great Nebula in Carina, is home to massive stars and changing nebulas. The Keyhole Nebula (NGC 3324), the bright structure just below the image center, houses several of these massive stars. The entire Carina Nebula, captured here, spans over 300 light years and lies about 7,500 light-years away in the constellation of Carina. Eta Carinae, the most energetic star in the nebula, was one of the brightest stars in the sky in the 1830s, but then faded dramatically. While Eta Carinae itself maybe on the verge of a supernova explosion, X-ray images indicate that much of the Great Nebula in Carina has been a veritable supernova factory. [via NASA] https://ift.tt/uv7YWVw 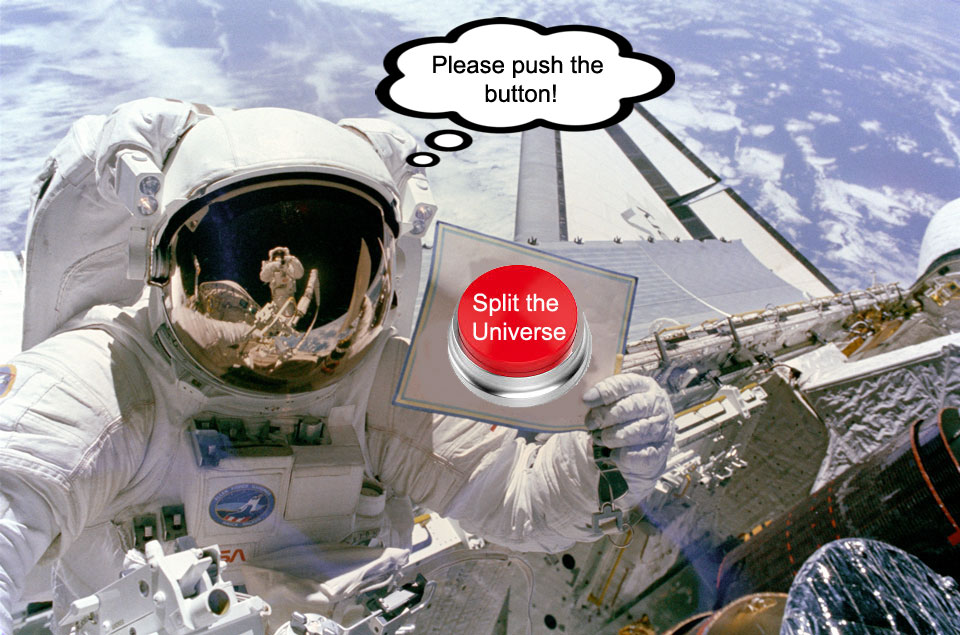 Just now, before you hit the button, two future universes are possible. After pressing the button, though, you will live in only one. A real-web version of the famous SchrÃ¶dinger’s cat experiment clicking the red button in the featured astronaut image should transform that image into a picture of the same astronaut holding one of two cats — one living, or one dead. The timing of your click, combined with the wiring of your brain and the millisecond timing of your device, will all conspire together to create a result dominated, potentially, by the randomness of quantum mechanics. Some believe that your personally-initiated quantum decision will split the universe in two, and that both the live-cat and dead-cat universes exist in separate parts of a larger multiverse. Others believe that the result of your click will collapse the two possible universes into one — in a way that could not have been predicted beforehand. Yet others believe that the universe is classically deterministic, so that by pressing the button you did not really split the universe, but just carried out an action predestined since time began. We at APOD believe that however silly you may feel clicking the red button, and regardless of the outcome, you should have a thought-provoking day. Or two. [via NASA] https://ift.tt/T5FPIs1 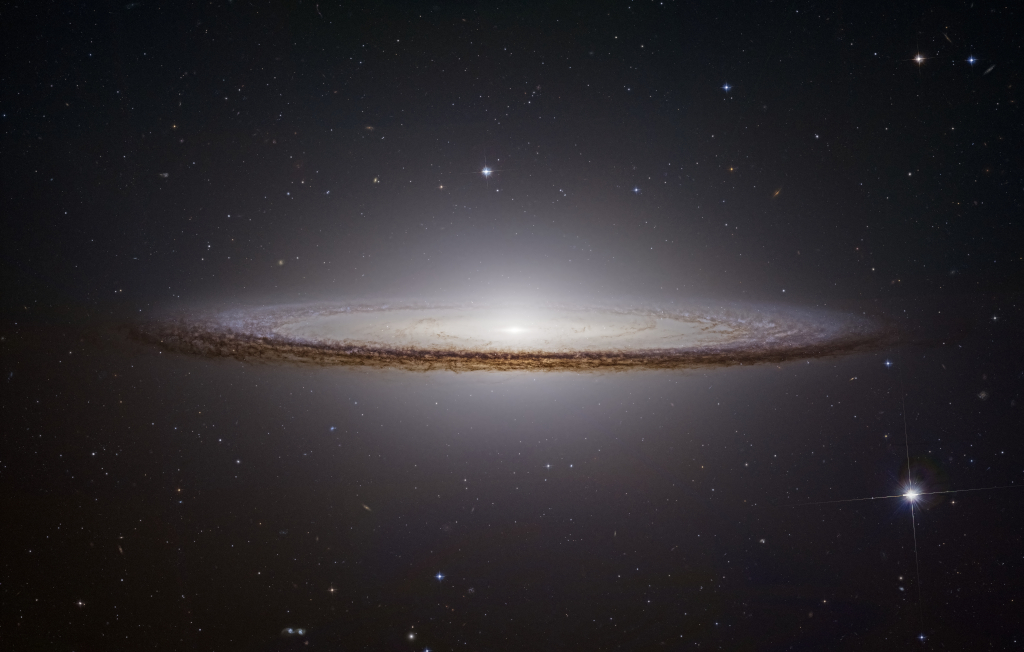 A gorgeous spiral galaxy, Messier 104 is famous for its nearly edge-on profile featuring a broad ring of obscuring dust lanes. Seen in silhouette against an extensive central bulge of stars, the swath of cosmic dust lends a broad brimmed hat-like appearance to the galaxy suggesting a more popular moniker, the Sombrero Galaxy. This sharp view of the well-known galaxy was made from over 10 hours of Hubble Space Telescope image data, processed to bring out faint details often lost in the overwhelming glare of M104’s bright central bulge. Also known as NGC 4594, the Sombrero galaxy can be seen across the spectrum, and is host to a central supermassive black hole. About 50,000 light-years across and 28 million light-years away, M104 is one of the largest galaxies at the southern edge of the Virgo Galaxy Cluster. Still, the spiky foreground stars in this field of view lie well within our own Milky Way. [via NASA] https://ift.tt/wWknQGO 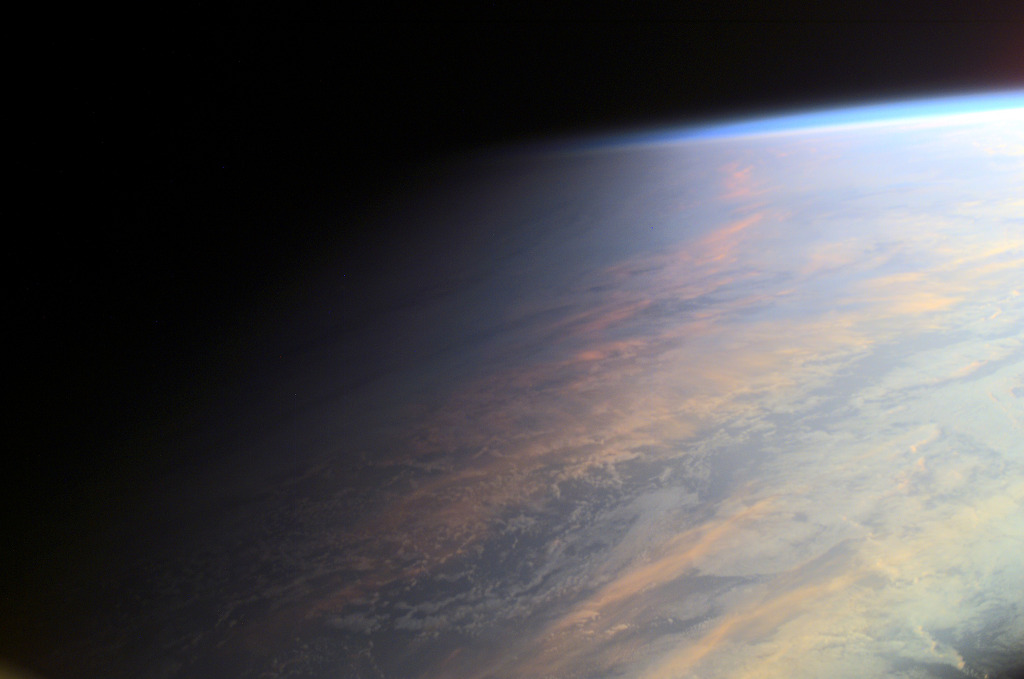 No sudden, sharp boundary marks the passage of day into night in this gorgeous view of ocean and clouds over our fair planet Earth. Instead, the shadow line or terminator is diffuse and shows the gradual transition to darkness we experience as twilight. With the Sun illuminating the scene from the right, the cloud tops reflect gently reddened sunlight filtered through the dusty troposphere, the lowest layer of the planet’s nurturing atmosphere. A clear high altitude layer, visible along the dayside’s upper edge, scatters blue sunlight and fades into the blackness of space. This picture was taken in June of 2001 from the International Space Station orbiting at an altitude of 211 nautical miles. Of course from home, you can check out the Earth Now. [via NASA] https://ift.tt/AI92UOd 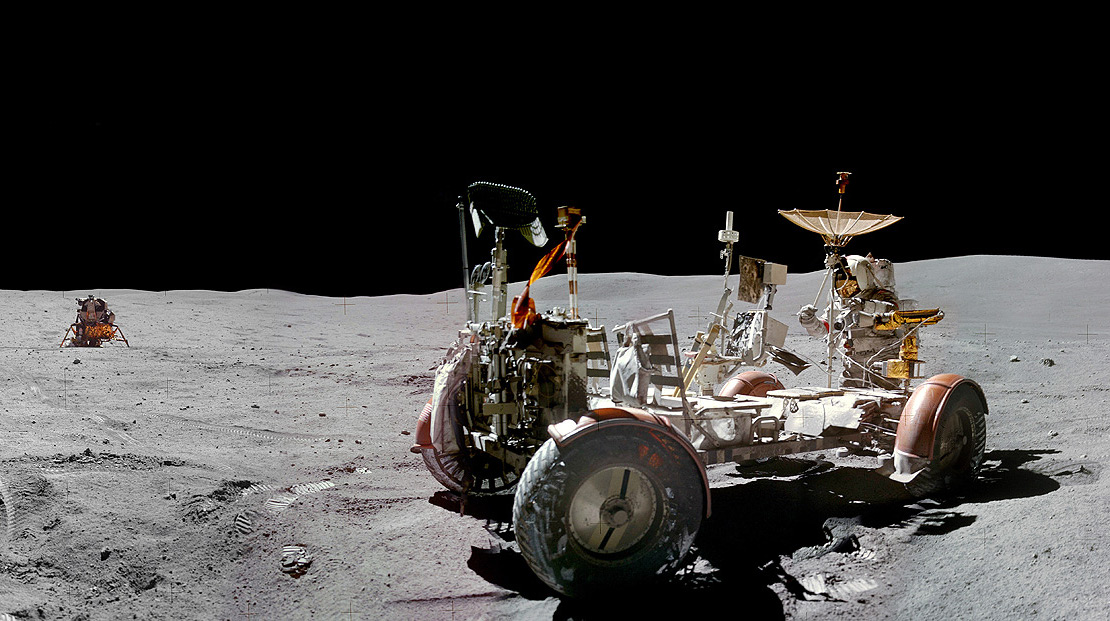 Fifty years ago, April 20, 1972, Apollo 16’s lunar module Orion touched down on the Moon’s near side in the south-central Descartes Highlands. While astronaut Ken Mattingly orbited overhead in Casper the friendly command and service module the Orion brought John Young and Charles Duke to the lunar surface. The pair would spend nearly three days on the Moon. Constructed from images (AS16-117-18814 to AS16-117-18820) taken near the end of their third and final surface excursion this panoramic view puts the lunar module in the distance toward the left. Their electric lunar roving vehicle in the foreground, Duke is operating the camera while Young aims the high gain communications antenna skyward, toward planet Earth. [via NASA] https://ift.tt/7aFhjKi
Rafael Bustamante
Cargando comentarios...