What lies at the edge of an expanding supernova? Subtle and delicate in appearance, these ribbons of shocked interstellar gas are part of a blast wave at the expanding edge of a violent stellar explosion that would have been easily visible to humans during the late stone age, about 20,000 years ago. The featured image was recorded by the Hubble Space Telescope and is a closeup of the outer edge of a supernova remnant known as the Cygnus Loop or Veil Nebula. The filamentary shock front is moving toward the top of the frame at about 170 kilometers per second, while glowing in light emitted by atoms of excited hydrogen gas. The distances to stars thought to be interacting with the Cygnus Loop have recently been found by the Gaia mission to be about 2400 light years distant. The whole Cygnus Loop spans six full Moons across the sky, corresponding to about 130 light years, and parts can be seen with a small telescope toward the constellation of the Swan (Cygnus). [via NASA] https://ift.tt/2S73H8F

Have you ever watched a lightning storm in awe? Join the crowd. Oddly, details about how lightning is produced remains a topic of research. What is known is that updrafts carry light ice crystals into collisions with larger and softer ice balls, causing the smaller crystals to become positively charged. After enough charge becomes separated, the rapid electrical discharge that is lightning occurs. Lightning usually takes a jagged course, rapidly heating a thin column of air to about three times the surface temperature of the Sun. The resulting shock wave starts supersonically and decays into the loud sound known as thunder. Lightning bolts are common in clouds during rainstorms, and on average 44 lightning bolts occur on the Earth every second. Pictured, over 60 images were stacked to capture the flow of lightning-producing storm clouds in July over Colorado Springs, Colorado, USA. [via NASA] https://ift.tt/36bxzJ2 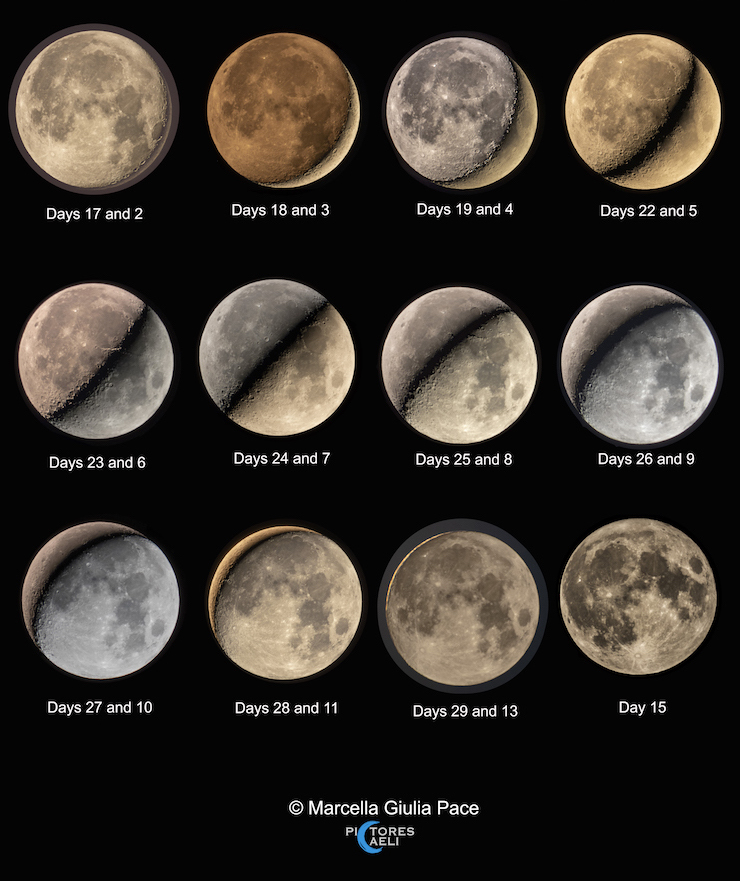 Observe the Moon each night and its visible sunlit portion will gradually change. In phases progressing from New Moon to Full Moon to New Moon again, a lunar cycle or synodic month is completed in about 29.5 days. They look full, but top left to bottom right these panels do show the range of lunar phases for a complete synodic month during August 2019 from Ragusa, Sicily, Italy, planet Earth. For this lunar cycle project the panels organize images of the lunar phases in pairs. Each individual image is paired with another image separated by about 15 days, or approximately half a synodic month. As a result the opposite sunlit portions complete the lunar disk and the shadow line at the boundary of lunar night and day, the terminator, steadily marches across the Moon’s familiar nearside. For extra credit, what lunar phase would you pair with the Moon tonight? [via NASA] https://ift.tt/2EEYzFK

The Great Spiral Galaxy in Andromeda (also known as M31), a mere 2.5 million light-years distant, is the closest large spiral to our own Milky Way. Andromeda is visible to the unaided eye as a small, faint, fuzzy patch, but because its surface brightness is so low, casual skygazers can’t appreciate the galaxy’s impressive extent in planet Earth’s sky. This entertaining composite image compares the angular size of the nearby galaxy to a brighter, more familiar celestial sight. In it, a deep exposure of Andromeda, tracing beautiful blue star clusters in spiral arms far beyond the bright yellow core, is combined with a typical view of a nearly full Moon. Shown at the same angular scale, the Moon covers about 1/2 degree on the sky, while the galaxy is clearly several times that size. The deep Andromeda exposure also includes two bright satellite galaxies, M32 and M110 (below and right). [via NASA] https://ift.tt/365QNQw 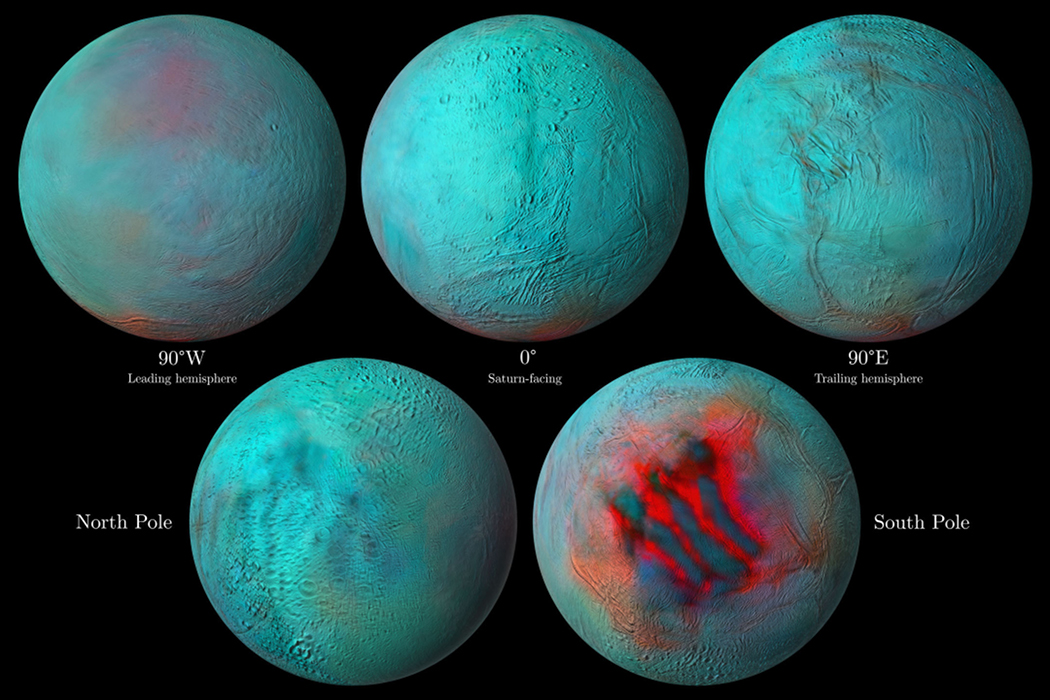 One of our Solar System’s most tantalizing worlds, icy Saturnian moon Enceladus appears in these detailed hemisphere views from the Cassini spacecraft. In false color, the five panels present 13 years of infrared image data from Cassini’s Visual and Infrared Mapping Spectrometer and Imaging Science Subsystem. Fresh ice is colored red, and the most dramatic features look like long gashes in the 500 kilometer diameter moon’s south polar region. They correspond to the location of tiger stripes, surface fractures that likely connect to an ocean beneath the Enceladus ice shell. The fractures are the source of the moon’s icy plumes that continuously spew into space. The plumes were discovered by by Cassini in 2005. Now, reddish hues in the northern half of the leading hemisphere view also indicate a recent resurfacing of other regions of the geologically active moon, a world that may hold conditions suitable for life. [via NASA] https://ift.tt/32TPYZ0

Yes, but have you ever seen the space station do this? If you know when and where to look, watching the bright International Space Station (ISS) drift across your night sky is a fascinating sight — but not very unusual. Images of the ISS crossing in front of the half-degree Moon or Sun do exist, but are somewhat rare as they take planning, timing, and patience to acquire. Catching the ISS crossing in front of minuscule Mars, though, is on another level. Using online software, the featured photographer learned that the unusual transit would be visible only momentarily along a very narrow stretch of nearby land spanning just 90 meters. Within this stretch, the equivalent ground velocity of the passing ISS image would be a quick 7.4 kilometers per second. However, with a standard camera, a small telescope, an exact location to set up his equipment, an exact direction to point the telescope, and sub-millisecond timing — he created a video from which the featured 0.00035 second exposure was extracted. In the resulting image capture, details on both Mars and the ISS are visible simultaneously. The featured image was acquired last Monday at 05:15:47 local time from just northeast of San Diego, California, USA. Although typically much smaller, angularly, than the ISS, Mars is approaching its maximum angular size in the next few weeks, because the blue planet (Earth) is set to pass its closest to the red planet (Mars) in their respective orbits around the Sun. [via NASA] https://ift.tt/33S59RF

Does the Sun set in the same direction every day? No, the direction of sunset depends on the time of the year. Although the Sun always sets approximately toward the west, on an equinox like today the Sun sets directly toward the west. After today’s September equinox, the Sun will set increasingly toward the southwest, reaching its maximum displacement at the December solstice. Before today’s September equinox, the Sun had set toward the northwest, reaching its maximum displacement at the June solstice. The featured time-lapse image shows seven bands of the Sun setting one day each month from 2019 December through 2020 June. These image sequences were taken from Alberta, Canada — well north of the Earth’s equator — and feature the city of Edmonton in the foreground. The middle band shows the Sun setting during the last equinox — in March. From this location, the Sun will set along this same equinox band again today. [via NASA] https://ift.tt/33Smb2h

Capturing this sunrise required both luck and timing. First and foremost, precise timing was needed to capture a sailboat crossing right in front of a rising Sun. Additionally, by a lucky coincidence, the background Sun itself appears unusual — it looks like the Greek letter Omega (Î©). In reality, the Sun remained its circular self — the Omega illusion was created by sunlight refracting through warm air just above the water. Optically, the feet of the capital Omega are actually an inverted image of the Sun region just above it. Although somewhat rare, optical effects caused by the Earth’s atmosphere can make distant objects near the horizon — including the Sun and Moon — look quite unusual. This single exposure image was taken over the Mediterranean Sea just over two weeks ago near Valencia, Spain. [via NASA] https://ift.tt/35SpHMD 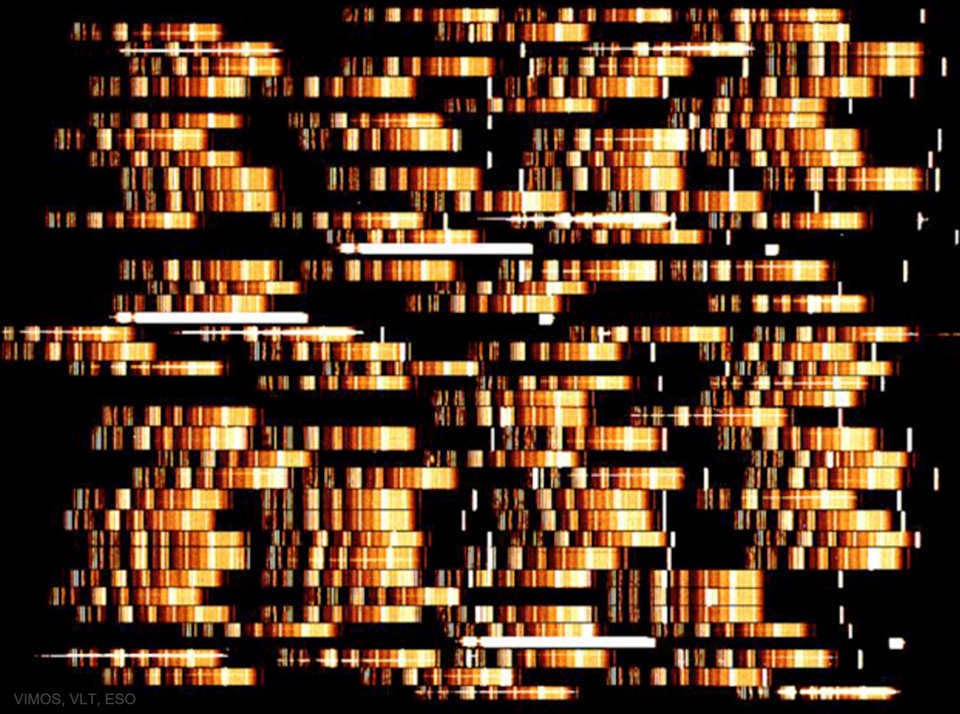 In the distant universe, time appears to run slowly. Since time-dilated light appears shifted toward the red end of the spectrum (redshifted), astronomers are able to use cosmological time-slowing to help measure vast distances in the universe. Featured, the light from distant galaxies has been broken up into its constituent colors (spectra), allowing astronomers to measure the cosmological redshift of known spectral lines. The novelty of the featured image is that the distance to hundreds of galaxies can be measured from a single frame, in this case one taken by the Visible MultiObject Spectrograph (VIMOS) operating at the Very Large Telescope (VLT) array in Chile. Analyzing the space distribution of distant objects will allow insight into when and how stars and galaxies formed, clustered, and evolved in the early universe. [via NASA] https://ift.tt/2RF1voA

Orion is a familiar constellation. The apparent positions of its stars in two dimensions create a well-known pattern on the bowl of planet Earth’s night sky. Orion may not look quite so familiar in this 3D view though. The illustration reconstructs the relative positions of Orion’s bright stars, including data from the Hipparcus catalog of parallax distances. The most distant star shown is Alnilam. The middle one in the projected line of three that make up Orion’s belt when viewed from planet Earth, Alnilam is nearly 2,000 light-years away, almost 3 times as far as fellow belt stars Alnitak and Mintaka. Though Rigel and Betelgeuse apparently shine brighter in planet Earth’s sky, that makes more distant Alnilam intrinsically (in absolute magnitude) the brightest of the familiar stars in Orion. In the Hipparcus catalog, errors in measured parallaxes for Orion’s stars can translate in to distance errors of a 100 light-years or so. [via NASA] https://ift.tt/32L2BFH
Rafael Bustamante