The Moon is normally seen in subtle shades of grey or gold. But small, measurable color differences have been greatly exaggerated to make this telescopic, multicolored, moonscape captured during the Moon’s full phase. The different colors are recognized to correspond to real differences in the chemical makeup of the lunar surface. Blue hues reveal titanium rich areas while orange and purple colors show regions relatively poor in titanium and iron. The familiar Sea of Tranquility, or Mare Tranquillitatis, is the blue area toward the upper right. White lines radiate across the orange-hued southern lunar highlands from 85-kilometer wide ray-crater Tycho at bottom right. The full moon that occurred earlier this month could be counted as a seasonal blue moon because it was, unusually, the third of four full moons to occur during northern summer (and hence southern winter). The featured 272-image composite demonstrates that the full Moon is always blue, but usually not blue enough in hue to ooh. [via NASA] https://ift.tt/2Y0Fnvd
Anuncio publicitario 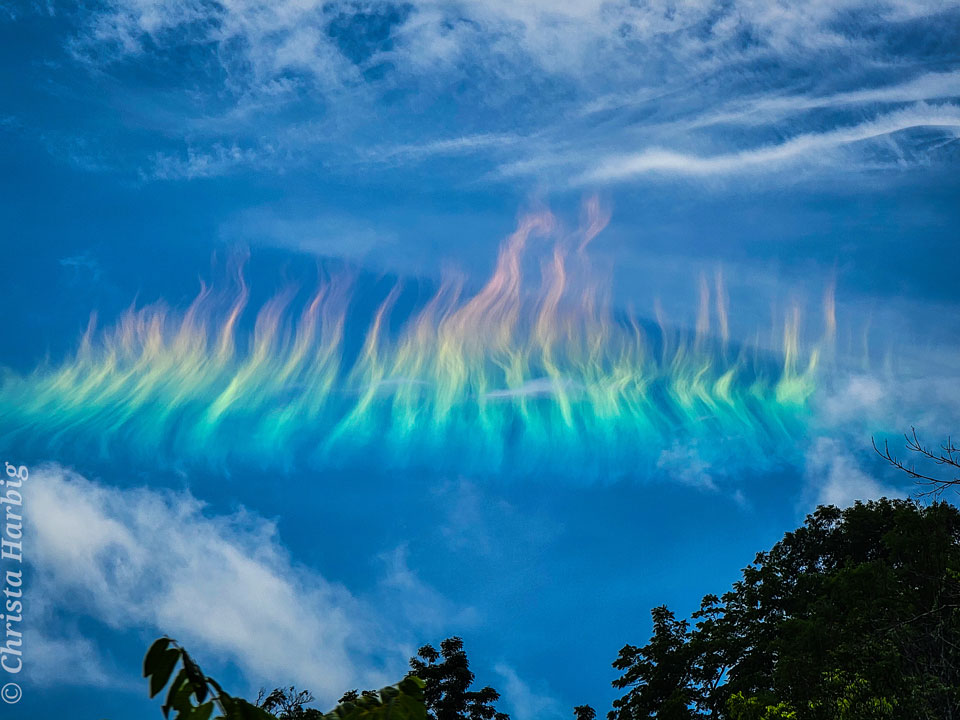 What’s happening to this cloud? Ice crystals in a distant cirrus cloud are acting like little floating prisms. Known informally as a fire rainbow for its flame-like appearance, a circumhorizon arc appears parallel to the horizon. For a circumhorizontal arc to be visible, the Sun must be at least 58 degrees high in a sky where cirrus clouds present below — in this case cirrus fibrates. The numerous, flat, hexagonal ice-crystals that compose the cirrus cloud must be aligned horizontally to properly refract sunlight in a collectively similar manner. Therefore, circumhorizontal arcs are somewhat unusual to see. The featured fire rainbow was photographed earlier this month near North Fork Mountain in West Virginia, USA. [via NASA] https://ift.tt/3zsyAIN 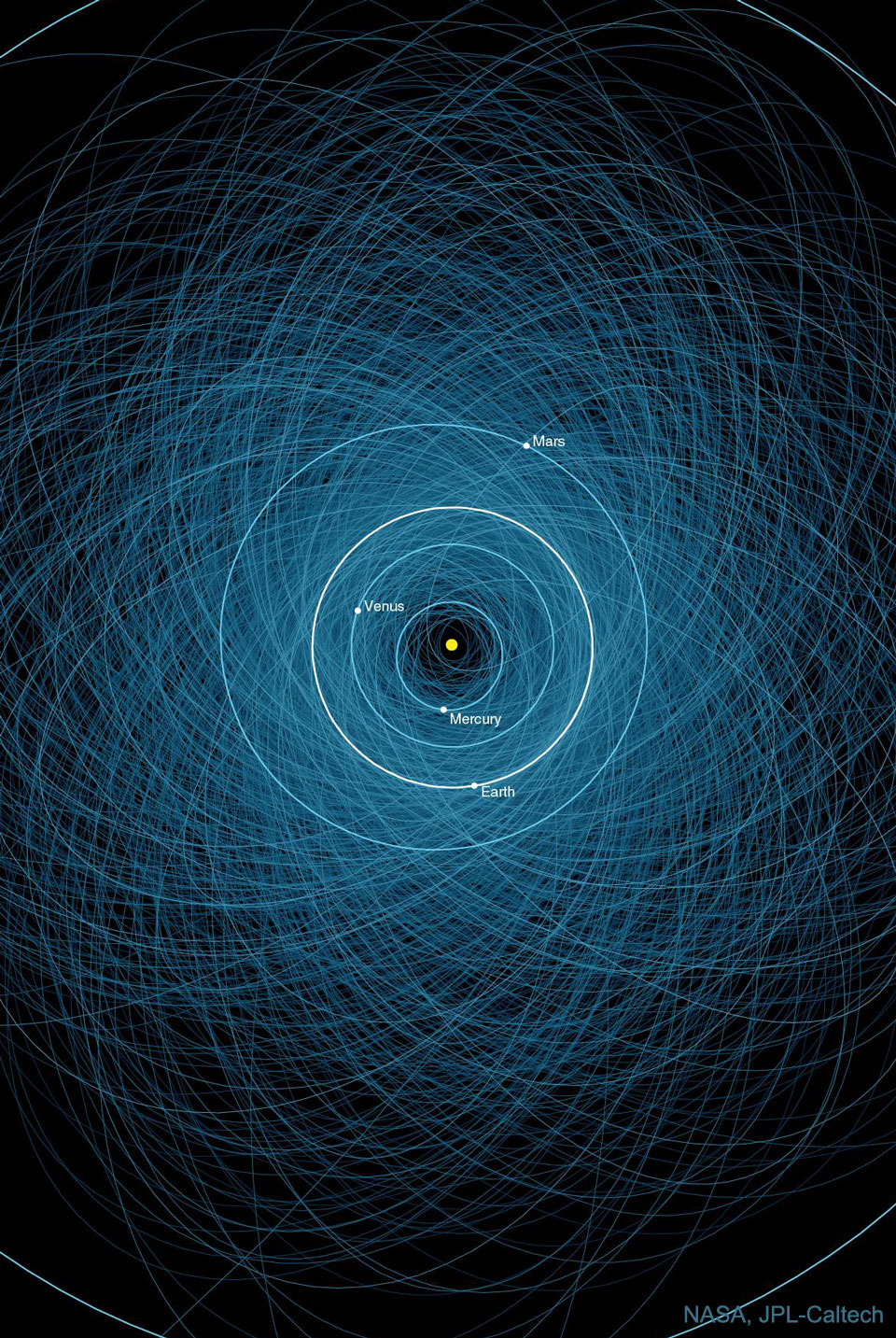 Are asteroids dangerous? Some are, but the likelihood of a dangerous asteroid striking the Earth during any given year is low. Because some past mass extinction events have been linked to asteroid impacts, however, humanity has made it a priority to find and catalog those asteroids that may one day affect life on Earth. Pictured here are the orbits of the over 1,000 known Potentially Hazardous Asteroids (PHAs). These documented tumbling boulders of rock and ice are over 140 meters across and will pass within 7.5 million kilometers of Earth — about 20 times the distance to the Moon. Although none of them will strike the Earth in the next 100 years — not all PHAs have been discovered, and past 100 years, many orbits become hard to predict. Were an asteroid of this size to impact the Earth, it could raise dangerous tsunamis, for example. To investigate Earth-saving strategies, NASA’s Double Asteroid Redirection Test (DART) is planned for launch later this year. Of course rocks and ice bits of much smaller size strike the Earth every day, usually pose no danger, and sometimes creating memorable fireball and meteor displays. [via NASA] https://ift.tt/2XX0n64

Taken on mission sol 180 (August 22) this sharp image from a Hazard Camera on the Perseverance rover looks out across a rock strewn floor of Jezero crater on Mars. At 52.5 centimeters (21 inches) in diameter, one of the rover’s steerable front wheels is at lower left in the frame. Near center is a large rock nicknamed Rochette. Mission planners don’t want to avoid Rochette though. Instead Perseverance will be instructed to reach out with its 2 meter long robotic arm and abrade the rock’s surface, to determine whether it has a consistency suitable for obtaining a sample, slightly thicker than a pencil, using the rover’s coring bit. Samples collected by Perseverance would be returned to Earth by a future Mars mission. [via NASA] https://ift.tt/3ztb8Lw 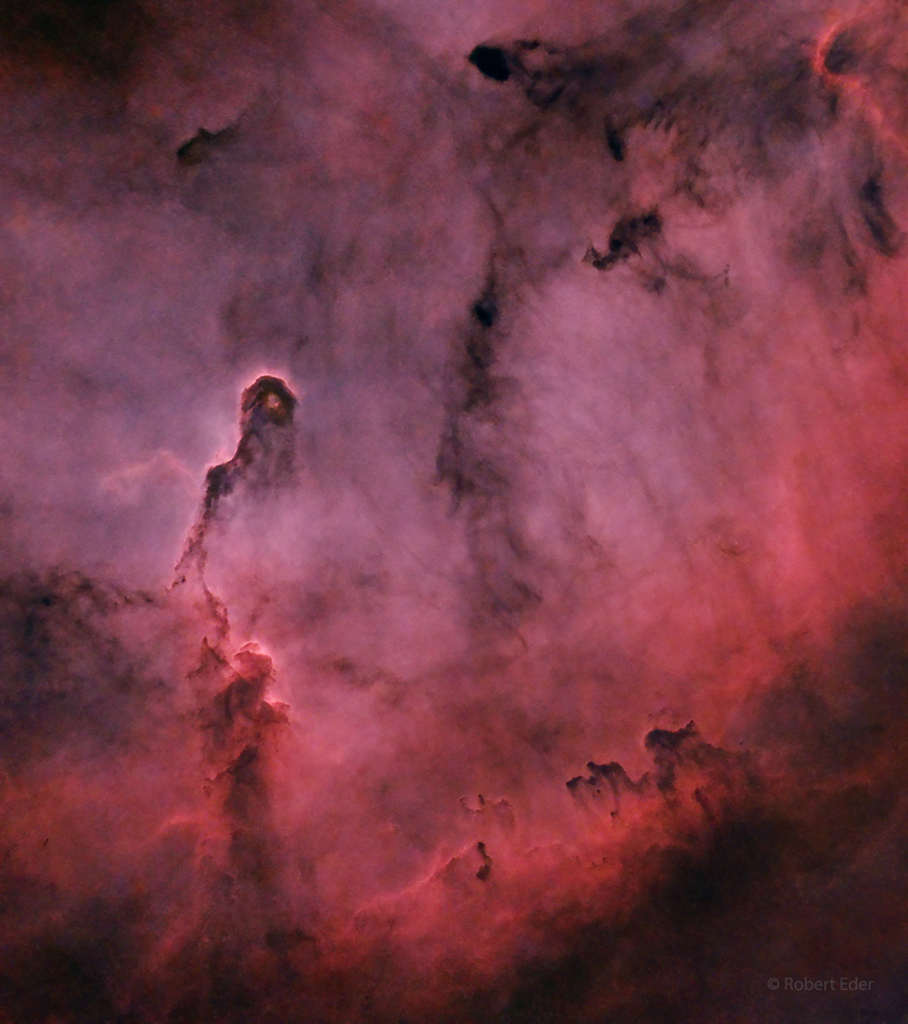 Like an illustration in a galactic Just So Story, the Elephant’s Trunk Nebula winds through the emission nebula and young star cluster complex IC 1396, in the high and far off constellation of Cepheus. Also known as vdB 142, seen on the left the cosmic elephant’s trunk is over 20 light-years long. Removed by digital processing, no visible stars are in this detailed telescopic close-up view highlighting the bright swept-back ridges that outline pockets of cool interstellar dust and gas. But the dark, tendril-shaped clouds contain the raw material for star formation and hide protostars within. Nearly 3,000 light-years distant, the relatively faint IC 1396 complex covers a large region on the sky, spanning over 5 degrees. This starless rendition spans a 1 degree wide field of view though, about the angular size of 2 full moons. Of course the dark shapes below and right, marching toward the winding Elephant’s Trunk, are known to some as The Caravan. [via NASA] https://ift.tt/2Y5I8vz 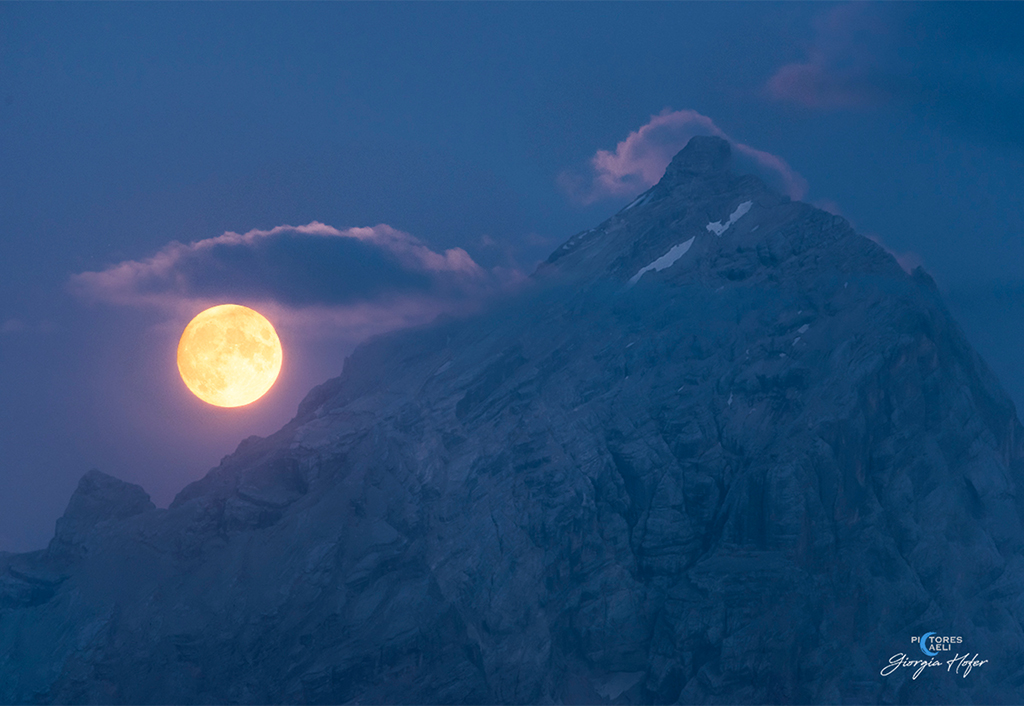 Nature photographers and other fans of planet Earth always look forward to the blue hour. That’s the transition in twilight, just before sunrise or after sunset, when the Sun is below the horizon but land and sky are still suffused with a beautiful blue light. After sunset on August 21, this blue hour snapshot captured the nearly full Moon as it rose opposite the Sun, above the rugged Italian Alps from Cortina d’Ampezzo, Italy. Sharing bluish hues with the sky, the rocky pyramid of Monte Antelao, also known as the King of the Dolomites, is the region’s prominent alpine peak. The moonlight is yellow, but even so this full Moon was known to some as a seasonal Blue Moon. That’s because by one definition the third full Moon of a season with four full moons in it is called a Blue Moon. Recognizing a season as the time between a solstice and an equinox, this season’s fourth full Moon will be rising in the blue hour of September 20, just before September’s equinox. [via NASA] https://ift.tt/2WqrfdQ

Does a ball drop faster on Earth, Jupiter, or Uranus? The featured animation shows a ball dropping from one kilometer high toward the surfaces of famous solar system bodies, assuming no air resistance. The force of gravity depends on the mass of the attracting object, with higher masses pulling down with greater forces. But gravitational force also depends on distance from the center of gravity, with shorter distances causing the ball to drop faster. Combining both mass and distance, it might be surprising to see that Uranus pulls the ball down slightly slower than Earth, despite containing over 14 times more mass. This happens because Uranus has a much lower density, which puts its cloud tops further away from its center of mass. Although the falling ball always speeds up, if you were on the ball you would not feel this acceleration because you would be in free-fall. Of the three planets mentioned, the video demonstrates a ball drops even faster on Jupiter than either Earth and Uranus. [via NASA] https://ift.tt/2XLA42C

It’s not the big disk that’s attracting the most attention. Although the big planet-forming disk around the star PDS 70 is clearly imaged and itself quite interesting. It’s also not the planet on the right, just inside the big disk, thatâ€™s being talked about the most. Although the planet PDS 70c is a newly formed and, interestingly, similar in size and mass to Jupiter. It’s the fuzzy patch around the planet PDS 70c that’s causing the commotion. That fuzzy patch is thought to be itself a dusty disk that is now forming into moons — and that has never been seen before. The featured image was taken by the Atacama Large Millimeter Array (ALMA) of 66 radio telescopes in the high Atacama Desert of northern Chile. Based on ALMA data, astronomers infer that the moon-forming exoplanetary disk has a radius similar to our Earth’s orbit, and may one day form three or so Luna-sized moons — not very different from our Jupiter’s four. [via NASA] https://ift.tt/3yiEY40

Is that one galaxy or three? Toward the right of the featured Hubble image of the massive galaxy cluster Abell 3827 is what appears to be a most unusual galaxy — curved and with three centers. A detailed analysis, however, finds that these are three images of the same background galaxy — and that there are at least four more images. Light we see from the single background blue galaxy takes multiple paths through the complex gravity of the cluster, just like a single distant light can take multiple paths through the stem of a wine glass. Studying how clusters like Abell 3827 and their component galaxies deflect distant light gives information about how mass and dark matter are distributed. Abell 3827 is so distant, having a redshift of 0.1, that the light we see from it left about 1.3 billion years ago — before dinosaurs roamed the Earth. Therefore, the cluster’s central galaxies have now surely all coalesced — in a feast of galactic cannibalism — into one huge galaxy near the cluster’s center. [via NASA] https://ift.tt/3mpzq5m

Spectacular explosions keep occurring in the binary star system named RS Ophiuchi. Every 20 years or so, the red giant star dumps enough hydrogen gas onto its companion white dwarf star to set off a brilliant thermonuclear explosion on the white dwarf’s surface. At about 5,000 light years distant, the resulting nova explosions cause the RS Oph system to brighten up by a huge factor and become visible to the unaided eye. The red giant star is depicted on the right of the above drawing, while the white dwarf is at the center of the bright accretion disk on the left. As the stars orbit each other, a stream of gas moves from the giant star to the white dwarf. Astronomers speculate that at some time in the next 100,000 years, enough matter will have accumulated on the white dwarf to push it over the Chandrasekhar Limit, causing a much more powerful and final explosion known as a supernova. Starting early this month, RS Oph was again seen exploding in a bright nova. [via NASA] https://ift.tt/3zdbeGQ
Rafael Bustamante
Cargando comentarios...