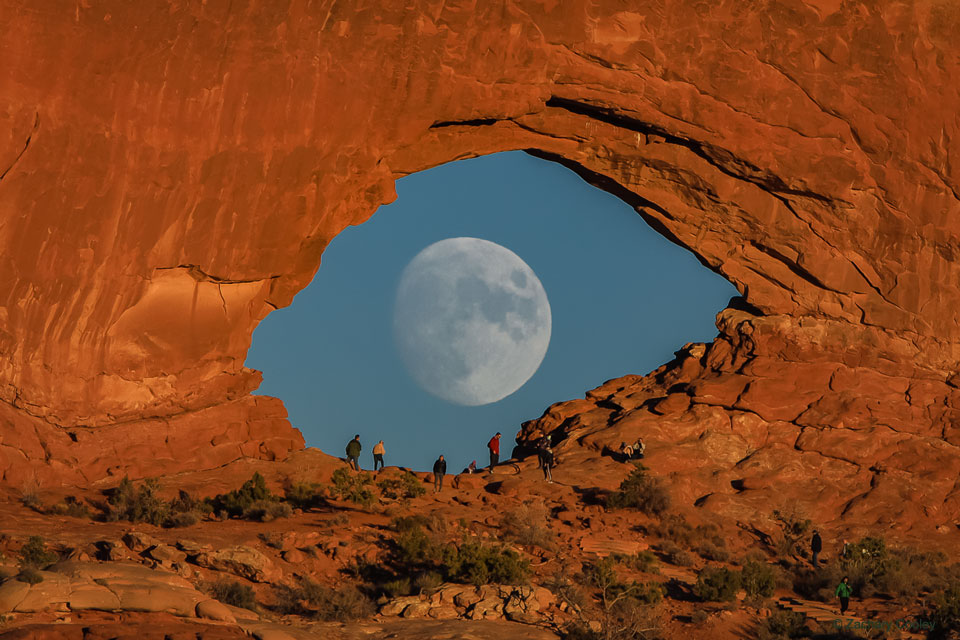 Who’s watching who? The featured image of the Moon through a gap in a wall of rock may appear like a giant eye looking back at you. Although, in late October, it took only a single exposure to capture this visual double, it also took a lot of planning. The photographic goal was achieved by precise timing — needed for a nearly full moon to appear through the eye-shaped arch, by precise locating — needed for the angular size of the Moon to fit iconically inside the rock arch, and by good luck — needed for a clear sky and for the entire scheme to work. The seemingly coincidental juxtaposition was actually engineered with the help of three smartphone apps. The pictured sandstone arch, carved by erosion, is millions of years old and just one of thousands of natural rock arches that have been found in Arches National Park near Moab, Utah, USA. Contrastingly, the pictured Moon can be found up in the sky from just about anywhere on Earth, about half the time. [via NASA] https://ift.tt/3fWyLTD 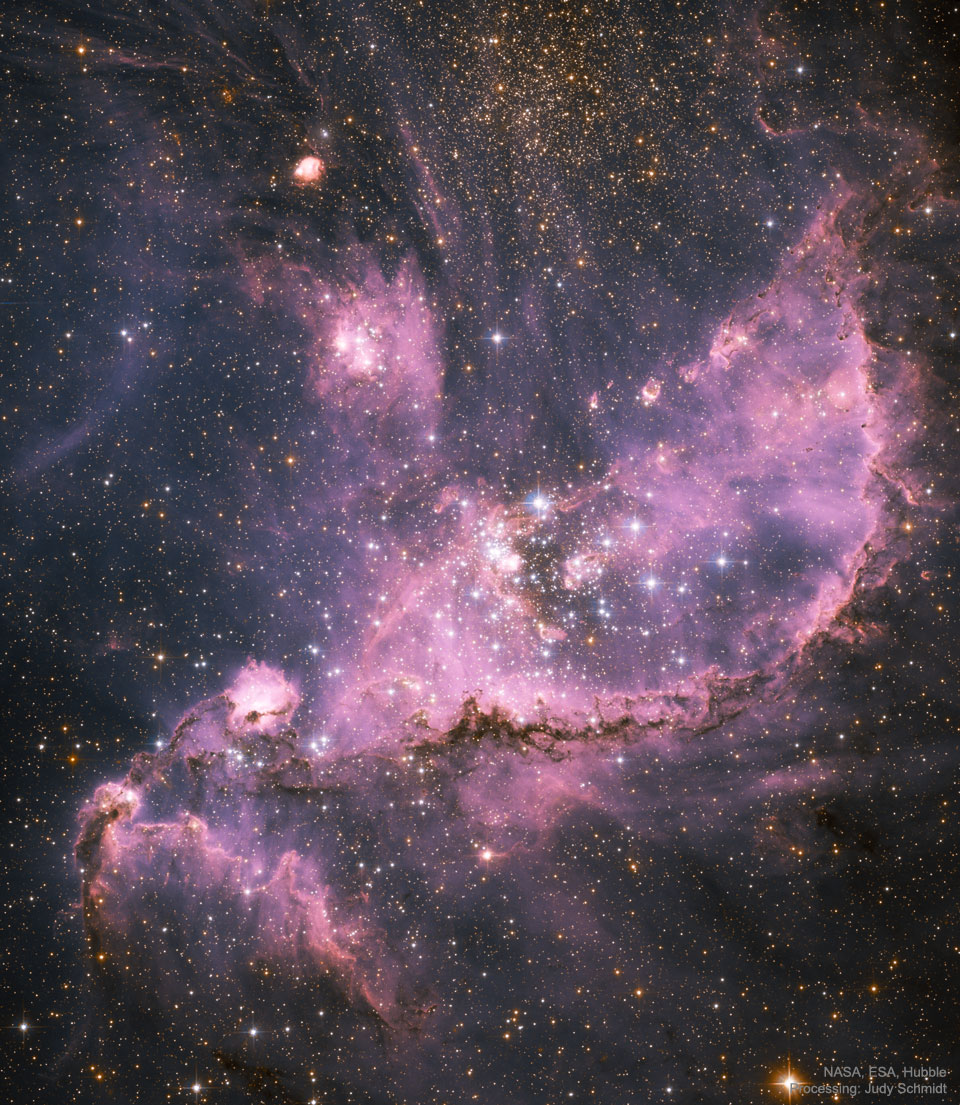 Are stars still forming in the Milky Way’s satellite galaxies? Found among the Small Magellanic Cloud’s (SMC’s) clusters and nebulas, NGC 346 is a star forming region about 200 light-years across, pictured here in the center of a Hubble Space Telescope image. A satellite galaxy of the Milky Way, the Small Magellanic Cloud (SMC) is a wonder of the southern sky, a mere 210,000 light-years distant in the constellation of the Toucan (Tucana). Exploring NGC 346, astronomers have identified a population of embryonic stars strung along the dark, intersecting dust lanes visible here on the right. Still collapsing within their natal clouds, the stellar infants’ light is reddened by the intervening dust. Toward the top of the frame is another star cluster with intrinsically older and redder stars. A small, irregular galaxy, the SMC itself represents a type of galaxy more common in the early Universe. These small galaxies, though, are thought to be building blocks for the larger galaxies present today. [via NASA] https://ift.tt/3lwxQKY 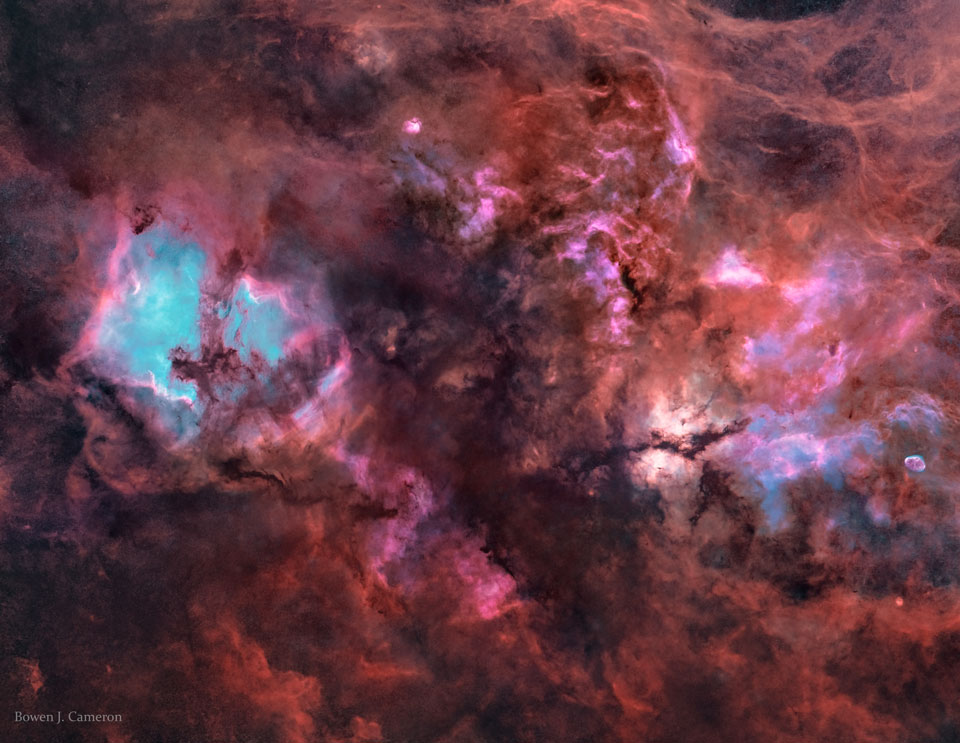 The sky is filled with faintly glowing gas, though it can take a sensitive camera and telescope to see it. For example, this twelve-degree-wide view of the northern part of the constellation Cygnus reveals a complex array of cosmic clouds of gas along the plane of our Milky Way galaxy. The featured mosaic of telescopic images was recorded through two filters: an H-alpha filter that transmits only visible red light from glowing hydrogen atoms, and a blue filter that transmits primarily light emitted by the slight amount of energized oxygen. Therefore, in this 18-hour exposure image, blue areas are hotter than red. Further digital processing has removed the myriad of point-like Milky Way stars from the scene. Recognizable bright nebulas include NGC 7000 (North America Nebula), and IC 5070 (Pelican Nebula) on the left with IC 1318 (Butterfly Nebula) and NGC 6888 (Crescent Nebula) on the right — but others can be found throughout the wide field. [via NASA] https://ift.tt/3mmdiG9 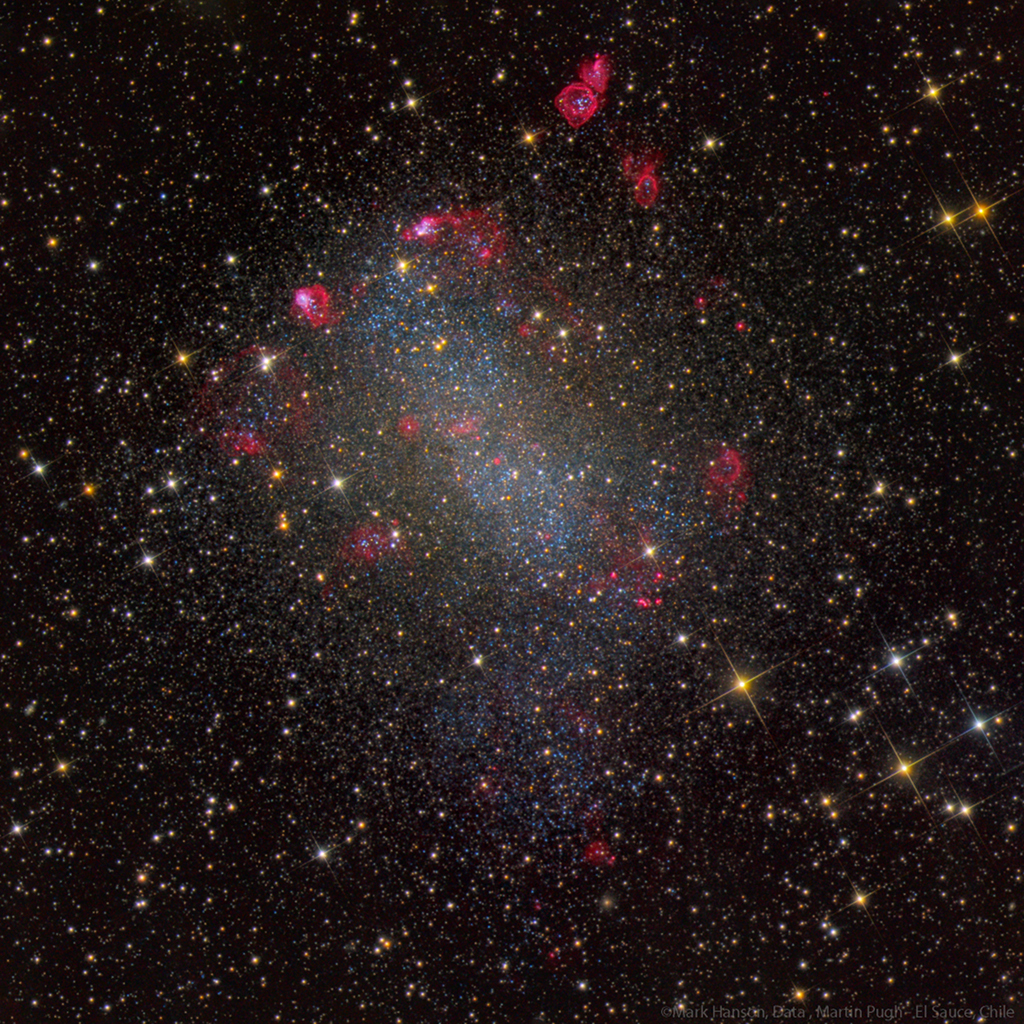 Grand spiral galaxies often seem to get all the glory, flaunting their young, bright, blue star clusters in beautiful, symmetric spiral arms. But small galaxies form stars too, like nearby NGC 6822, also known as Barnard’s Galaxy. Beyond the rich starfields in the constellation Sagittarius, NGC 6822 is a mere 1.5 million light-years away, a member of our Local Group of galaxies. A dwarf irregular galaxy similar to the Small Magellanic Cloud, NGC 6822 is about 7,000 light-years across. Brighter foreground stars in our Milky Way have a spiky appearance. Behind them, Barnard’s Galaxy is seen to be filled with young blue stars and mottled with the telltale pinkish hydrogen glow of star forming regions in this deep color composite image. [via NASA] https://ift.tt/3fGOO81

This Long March-5 rocket blasted off from the Wenchang launch site in southernmost Hainan province on Tuesday November 24, at 4:30 am Beijing Time, carrying China’s Chang’e-5 mission to the Moon. The lunar landing mission is named for the ancient Chinese goddess of the moon. Its goal is to collect about 2 kilograms (4.4 pounds) of lunar material from the surface and return it to planet Earth, the first robotic sample return mission to the Moon since the Soviet Union’s Luna 24 mission in 1976. The complex Chang’e-5 mission landing target is in the Oceanus Procellarum (Ocean of Storms). The smooth volcanic plain was also visited by the Apollo 12 mission in 1969. Chang’e-5’s lander is solar-powered and scheduled to operate on the lunar surface during its location’s lunar daylight, which will last about two Earth weeks, beginning around November 27. A capsule with the lunar sample on board would return to Earth in mid-December. [via NASA] https://ift.tt/3q5kfh2 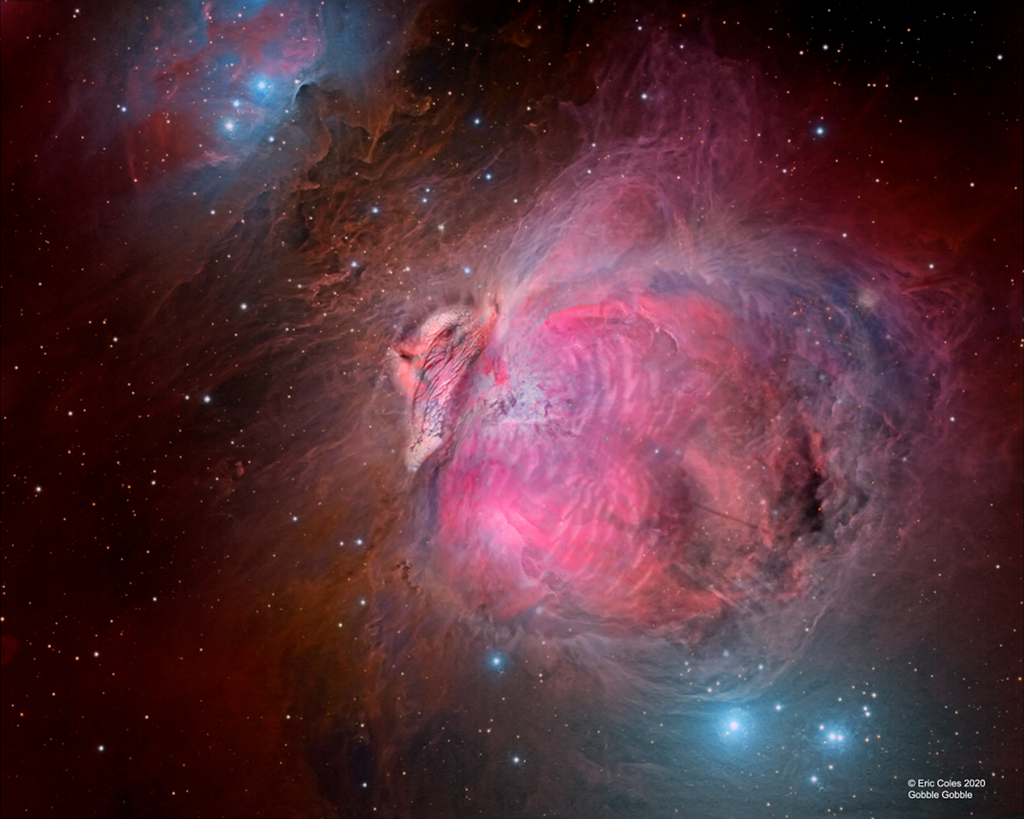 Surprisingly reminiscent of The Great Nebula in Orion, The Great Turkey Nebula spans this creative field of view. Of course if it were the Orion Nebula it would be our closest large stellar nursery, found at the edge of a large molecular cloud a mere 1,500 light-years away. Also known as M42, the Orion Nebula is visible to the eye as the middle “star” in the sword of Orion the Hunter, a constellation now rising in planet Earth’s evening skies. Stellar winds from clusters of newborn stars scattered throughout the Orion Nebula sculpt its ridges and cavities seen in familiar in telescopic images. Similar in size to the Orion Nebula, this Great Turkey Nebula was imagined to be about 13 light-years across. Stay safe and well. [via NASA] https://ift.tt/3q4x37t

How far can you see? The Andromeda Galaxy at 2.5 million light years away is the most distant object easily seen with your unaided eye. Most other apparent denizens of the night sky — stars, clusters, and nebulae — typically range from a few hundred to a few thousand light-years away and lie well within our own Milky Way Galaxy. Given its distance, light from Andromeda is likely also the oldest light that you can see. Also known as M31, the Andromeda Galaxy dominates the center of the featured zoomed image, taken from the dunes of BahÃ­a Creek, Patagonia, in southern Argentina. The image is a combination of 45 background images with one foreground image — all taken with the same camera and from the same location within 90 minutes. M110, a satellite galaxy of Andromenda is visible just below and to the left of M31’s core. As cool as it may be to see this neighboring galaxy to our Milky Way with your own eyes, long duration camera exposures can pick up many faint and breathtaking details. Recent data indicates that our Milky Way Galaxy will collide and combine with the similarly-sized Andromeda galaxy in a few billion years. [via NASA] https://ift.tt/37760zx 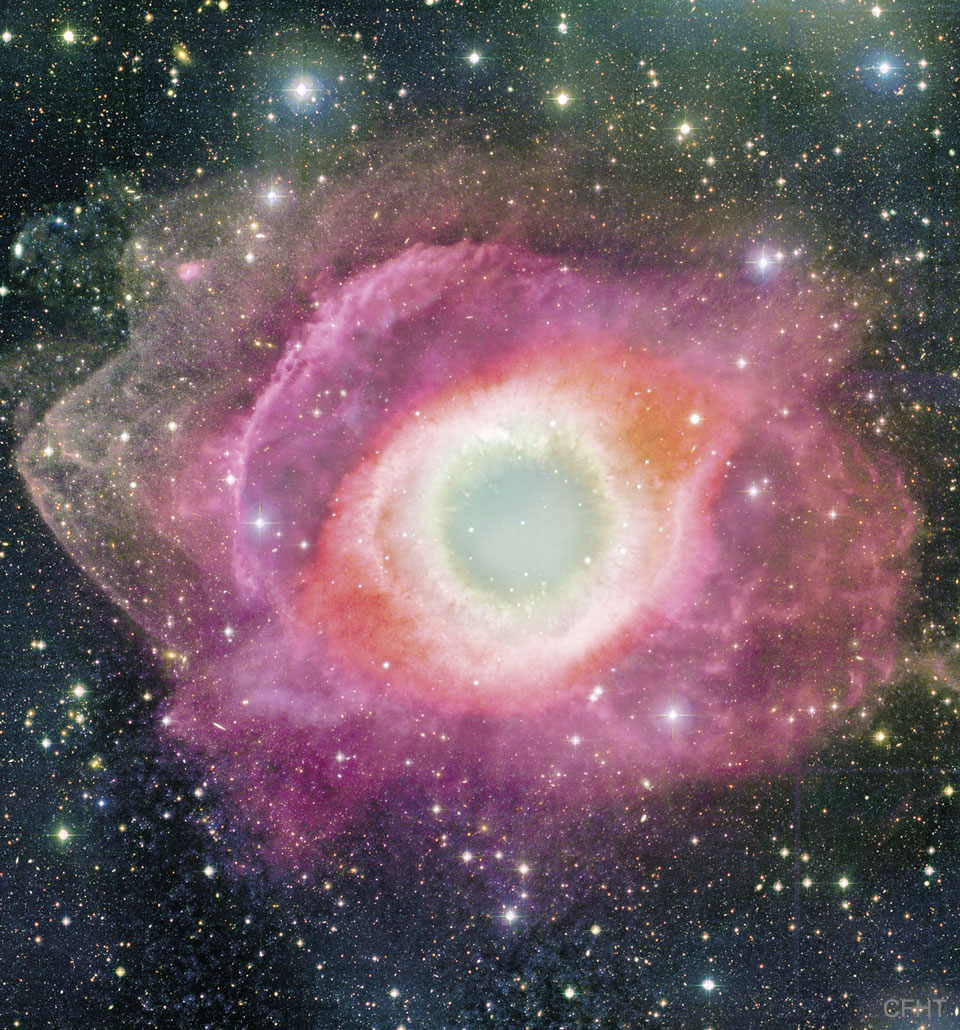 Will our Sun look like this one day? The Helix Nebula is one of brightest and closest examples of a planetary nebula, a gas cloud created at the end of the life of a Sun-like star. The outer gasses of the star expelled into space appear from our vantage point as if we are looking down a helix. The remnant central stellar core, destined to become a white dwarf star, glows in light so energetic it causes the previously expelled gas to fluoresce. The Helix Nebula, given a technical designation of NGC 7293, lies about 700 light-years away towards the constellation of the Water Bearer (Aquarius) and spans about 2.5 light-years. The featured picture was taken with the Canada-France-Hawaii Telescope (CFHT) located atop a dormant volcano in Hawaii, USA. A close-up of the inner edge of the Helix Nebula shows complex gas knots of unknown origin. [via NASA] https://ift.tt/2J3q25G

Why do colorful cloud bands encircle Jupiter? Jupiter’s top atmospheric layer is divided into light zones and dark belts that go all the way around the giant planet. It is high horizontal winds — in excess of 300 kilometers per hour — that cause the zones to spread out planet-wide. What causes these strong winds remains a topic of research. Replenished by upwelling gas, zonal bands are thought to include relatively opaque clouds of ammonia and water that block light from lower and darker atmospheric levels. One light-colored zone is shown in great detail in the featured vista taken by the robotic Juno spacecraft in 2017. Jupiter’s atmosphere is mostly clear and colorless hydrogen and helium, gases that are not thought to contribute to the gold and brown colors. What compounds create these colors is another active topic of research — but is hypothesized to involve small amounts of sunlight-altered sulfur and carbon. Many discoveries have been made from Juno’s data, including that water composes an unexpectedly high 0.25 percent of upper-level cloud molecules near Jupiter’s equator, a finding important not only for understanding Jovian currents but for the history of water in the entire Solar System. [via NASA] https://ift.tt/3nKcQ4P

Where did all the stars go? What used to be considered a hole in the sky is now known to astronomers as a dark molecular cloud. Here, a high concentration of dust and molecular gas absorb practically all the visible light emitted from background stars. The eerily dark surroundings help make the interiors of molecular clouds some of the coldest and most isolated places in the universe. One of the most notable of these dark absorption nebulae is a cloud toward the constellation Ophiuchus known as Barnard 68, pictured here. That no stars are visible in the center indicates that Barnard 68 is relatively nearby, with measurements placing it about 500 light-years away and half a light-year across. It is not known exactly how molecular clouds like Barnard 68 form, but it is known that these clouds are themselves likely places for new stars to form. In fact, Barnard 68 itself has been found likely to collapse and form a new star system. It is possible to look right through the cloud in infrared light. [via NASA] https://ift.tt/35SD531
Rafael Bustamante