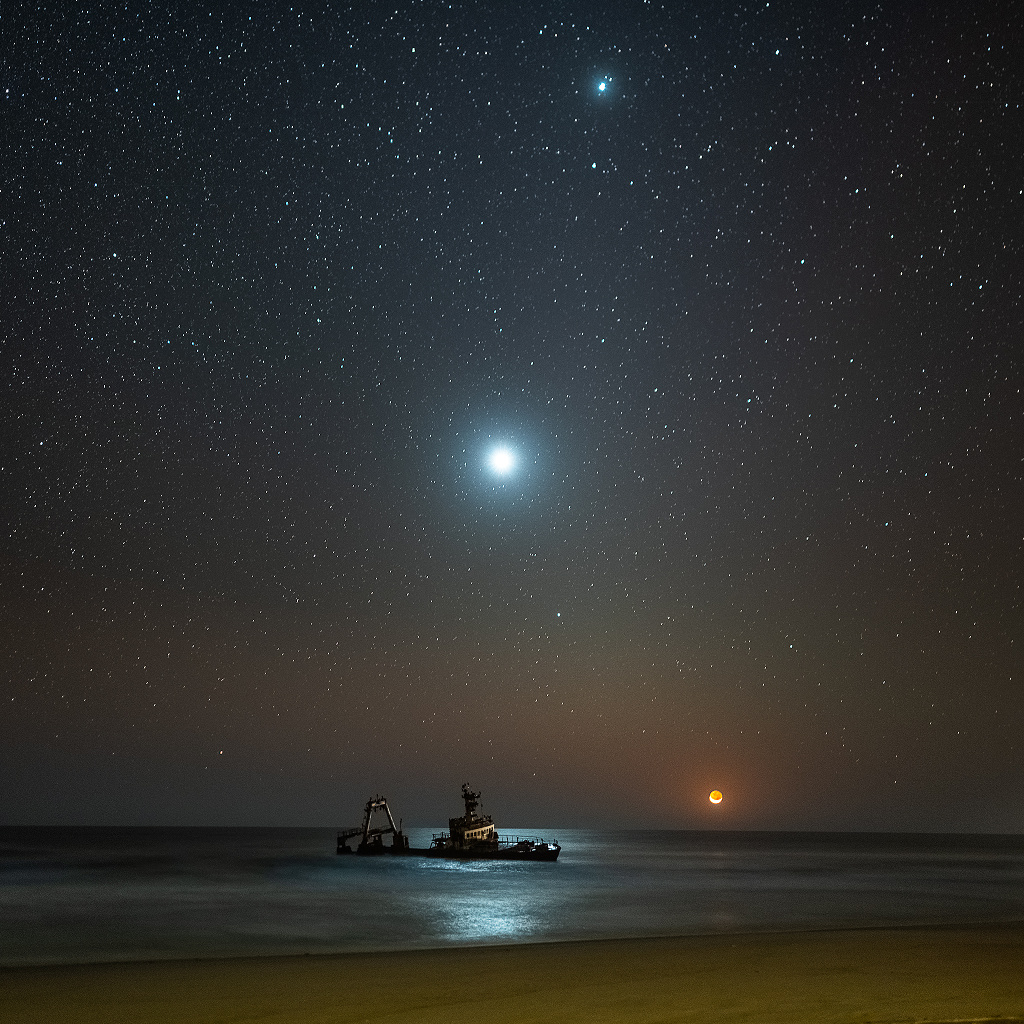 A crescent Moon is about to sink under the western horizon in this sea and night skyscape. The atmospheric photo was taken on September 11 from the desert shore along the Skeleton Coast of Namibia. So close to moonset, the moonlight is reddened and dimmed by the low, long line-of-sight across the Atlantic. But near the center of the frame Venus still shines brightly, its light reflected in calm ocean waters. The celestial beacon above the brilliant evening star is bright planet Jupiter. Namibia’s Skeleton Coast was so named for the many seal and whale bones that were once strewn along the shoreline. In more recent times it’s better known for shipwrecks. [via NASA] https://ift.tt/2FDUNfg 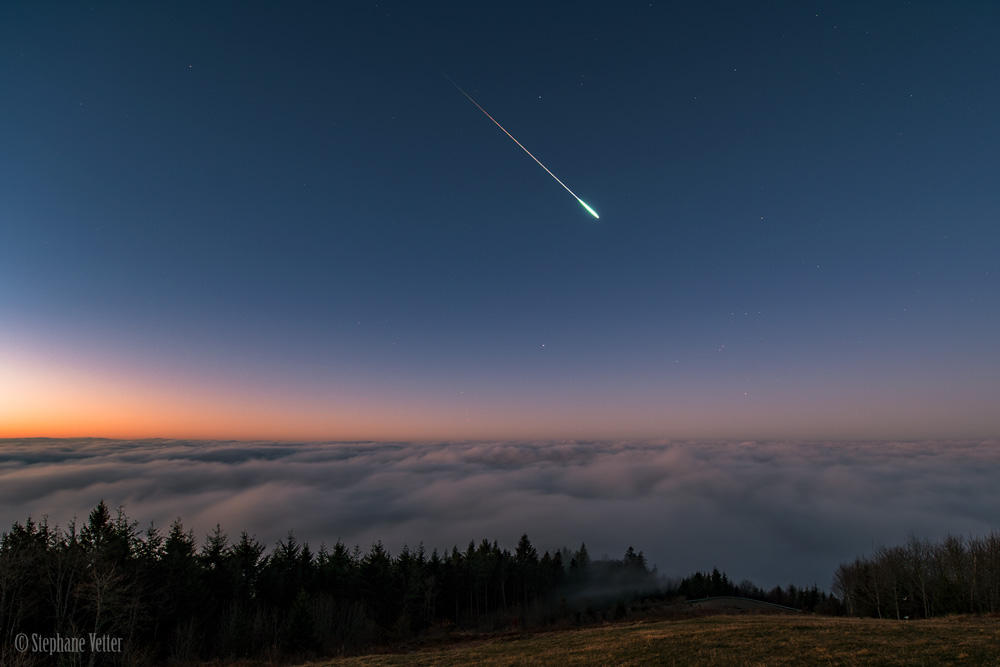 On November 17, just an hour before sunrise, this bright and colorful meteor flashed through clear predawn skies. Above a sea of clouds this striking autumn morning’s moment was captured from Hochblauen, a prominent 1165 meter high summit in southern Germany’s Black Forest. Shining through the twilight, Sirius as well as the familiar stars of Orion are recognizable near the southwestern horizon, and the meteor seems headed right for the hunter’s belt and sword. Still, as part of the annual Leonid meteor shower, the meteor trail does point back to the shower’s radiant. The constellation Leo is high above the horizon and off the top left of the frame. [via NASA] https://ift.tt/2QhCe4A 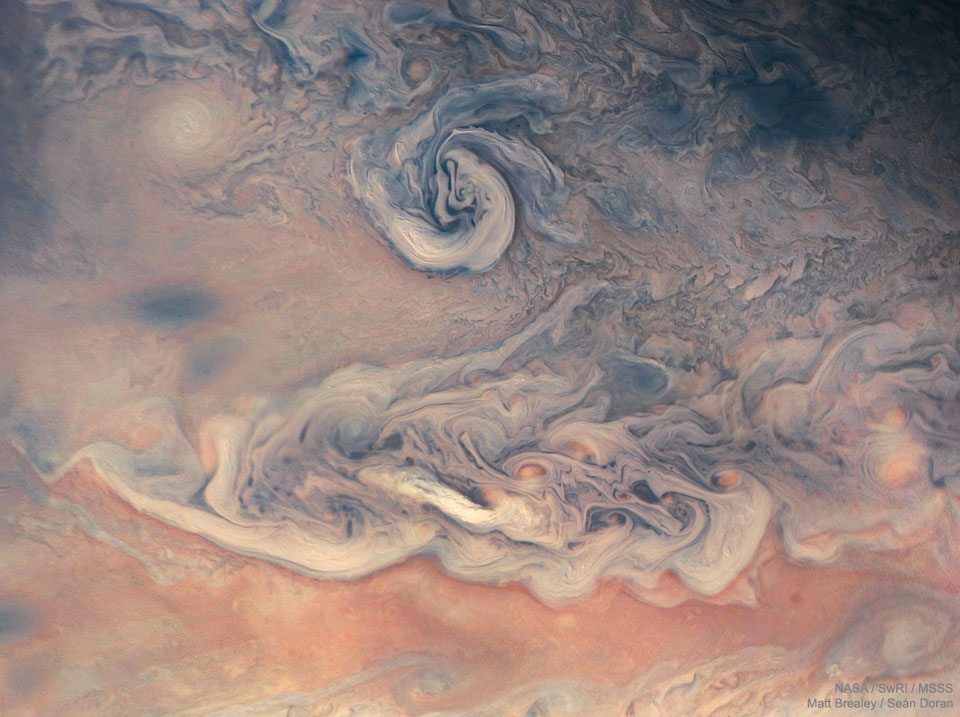 What creates the colors in Jupiter’s clouds? No one is sure. The thick atmosphere of Jupiter is mostly hydrogen and helium, elements which are colorless at the low temperatures of the Jovian cloud tops. Which trace elements provide the colors remains a topic of research, although small amounts of ammonium hydrosulfide are one leading candidate. What is clear from the featured color-enhanced image — and many similar images — is that lighter clouds are typically higher up than darker ones. Pictured, light clouds swirl around reddish regions toward the lower right, while they appear to cover over some darker domains on the upper right. The featured image was taken by the robotic Juno spacecraft during its 14th low pass over Jupiter earlier this year. Juno continues in its looping elliptical orbit, swooping near the huge planet every 53 days and exploring a slightly different sector each time around. [via NASA] https://ift.tt/2zjMSyq

Why is ‘Oumuamua differing from its expected trajectory? Last year, 1I/2017 U1 ‘Oumuamua became the first known asteroid from interstellar space to pass through our Solar System. Just over a year ago, this tumbling interstellar rock even passed rather close to the Earth. The asteroid’s future path should have been easy to predict given standard gravity — but ‘Oumuamua’s path has proven to be slightly different. In the featured animation, ‘Oumuamua is shown approaching and exiting the vicinity of our Sun, with the expected gravitational and observed trajectories labelled. The leading natural hypothesis for this unexpected deviation is internal gas jets becoming active on the Sun-warmed asteroid — but speculation and further computer simulations are ongoing. ‘Oumuamua will never return, but modern sky monitors are expected to find and track similar interstellar asteroids within the next few years. [via NASA] https://ift.tt/2PCuP0g 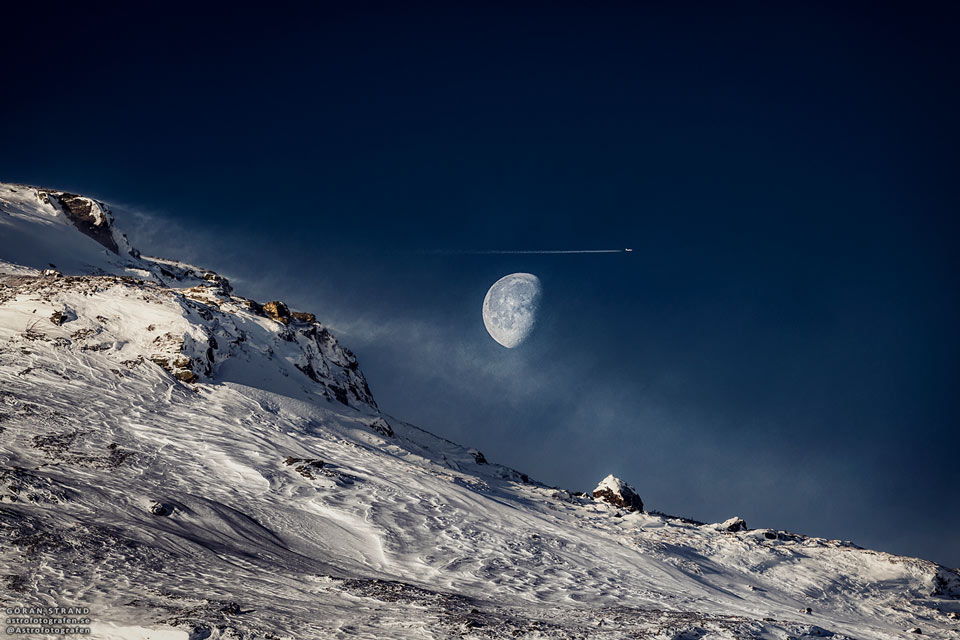 This is a gibbous Moon. More Earthlings are familiar with a full moon, when the entire face of Luna is lit by the Sun, and a crescent moon, when only a sliver of the Moon’s face is lit. When more than half of the Moon is illuminated, though, but still short of full illumination, the phase is called gibbous. Rarely seen in television and movies, gibbous moons are quite common in the actual night sky. The featured image was taken in Jämtland, Sweden near the end of last month. That gibbous moon turned, in a few days, into a crescent moon, and then a new moon, then back to a crescent, and a few days ago back to gibbous. And this same gibbous moon is visible again tonight, leading up to the Full Beaver Moon that occurs Friday night. Setting up to capture a picturesque gibbous moonscape, the photographer was quite surprised to find an airplane, surely well in the foreground, appearing to fly past it. [via NASA] https://ift.tt/2S492eV 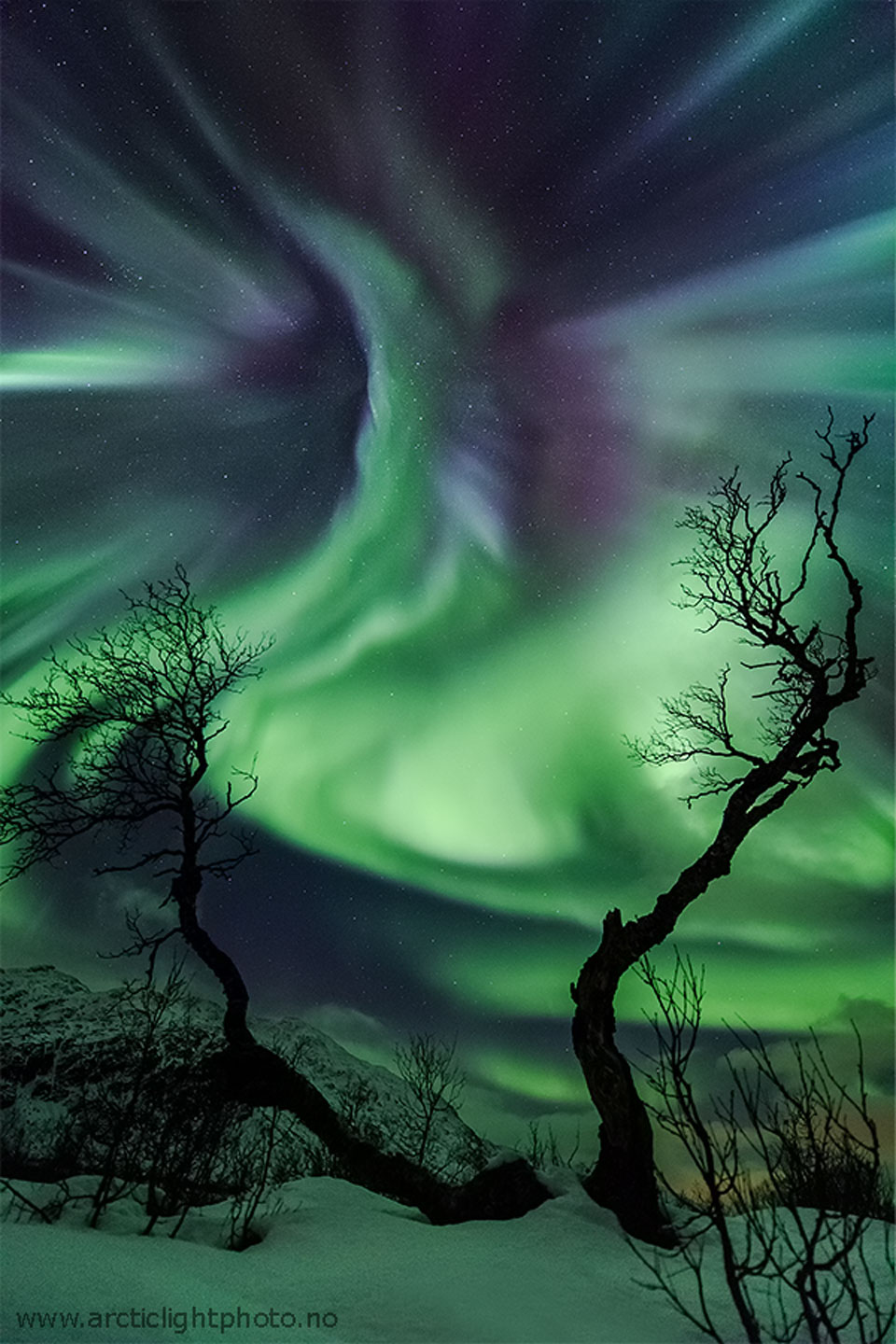 It was Halloween and the sky looked like a creature. Exactly which creature, the astrophotographer was unsure but (possibly you can suggest one). Exactly what caused this eerie apparition in 2013 was sure: one of the best auroral displays in recent years. This spectacular aurora had an unusually high degree of detail. Pictured here, the vivid green and purple auroral colors are caused by high atmospheric oxygen and nitrogen reacting to a burst of incoming electrons. Birch trees in Tromsø, Norway formed an also eerie foreground. Recently, new photogenic auroras have accompanied new geomagnetic storms. [via NASA] https://ift.tt/2Dt1FJQ 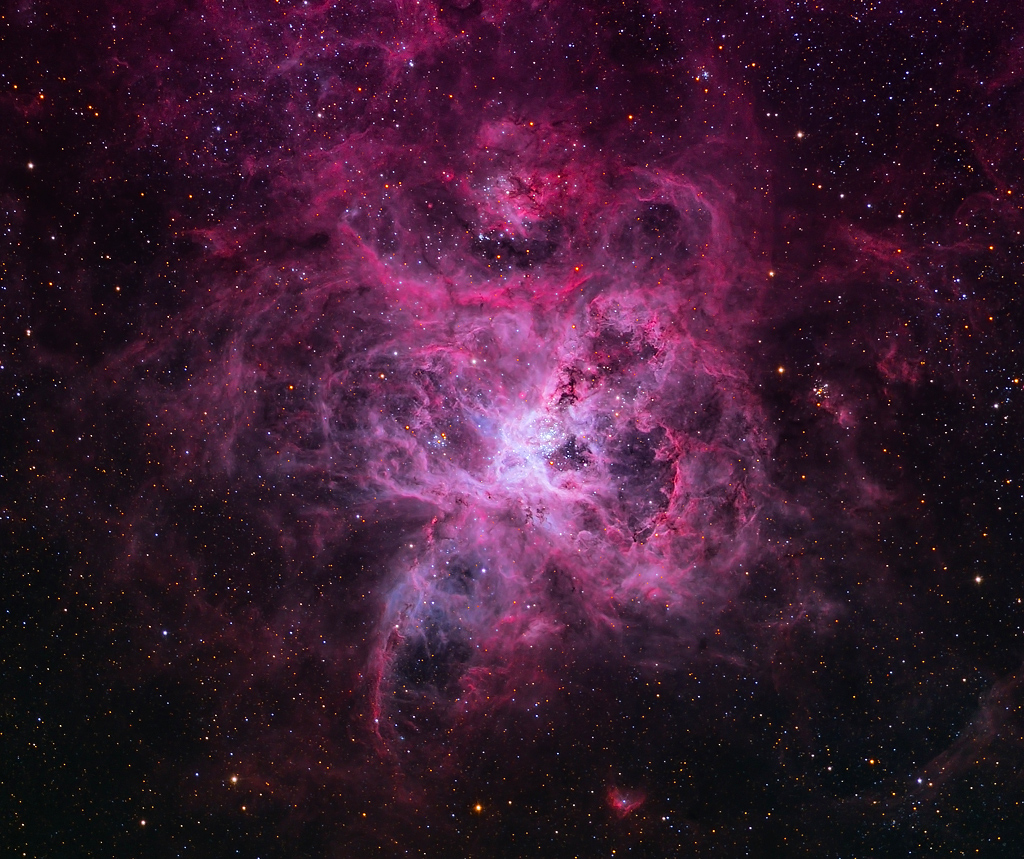 The Tarantula Nebula, also known as 30 Doradus, is more than a thousand light-years in diameter, a giant star forming region within nearby satellite galaxy the Large Magellanic Cloud. About 180 thousand light-years away, it’s the largest, most violent star forming region known in the whole Local Group of galaxies. The cosmic arachnid sprawls across this spectacular view, composed with narrowband filter data centered on emission from ionized hydrogen atoms. Within the Tarantula (NGC 2070), intense radiation, stellar winds and supernova shocks from the central young cluster of massive stars, cataloged as R136, energize the nebular glow and shape the spidery filaments. Around the Tarantula are other star forming regions with young star clusters, filaments, and blown-out bubble-shaped clouds. In fact, the frame includes the site of the closest supernova in modern times, SN 1987A, left of center. The rich field of view spans about 1 degree or 2 full moons, in the southern constellation Dorado. But were the Tarantula Nebula closer, say 1,500 light-years distant like the local star forming Orion Nebula, it would take up half the sky. [via NASA] https://ift.tt/2K8NcnP
Rafael Bustamante